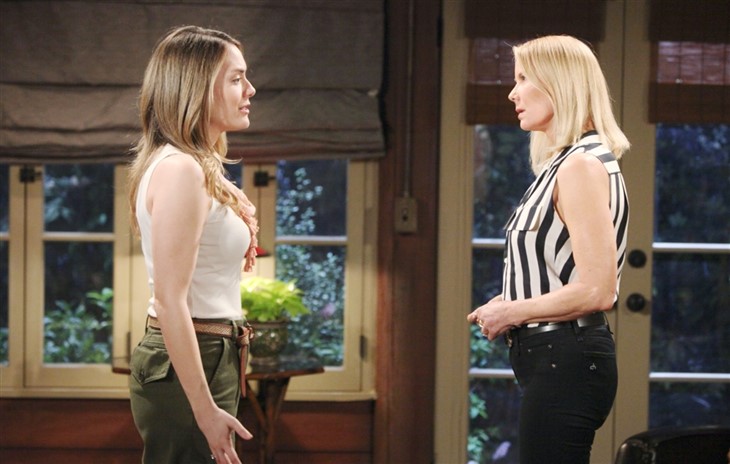 The Bold and the Beautiful (B&B) spoilers reveal that Deacon Sharpe (Sean Kanan) is back. Walking into Hope Logan Spencer’s (Annika Noelle) home, Deacon plops his baggage on the floor. Brooke Logan Forrester (Katherine Kelly Lang) demands Hope give her father the boot and cut him out of her life. However, Hope yells that she can’t do that.

The Bold And The Beautiful Spoilers – Communicating With Deacon Sharpe

B&B spoilers reveal that it was confirmed that a familiar face would return to the CBS soap. The mysterious comeback just happens to be Hope’s father, who is known for his schemes and troublemaking ways.

It turns out that Hope initiated contact with Deacon when she thought Beth Spencer (Madeline Valdez and River Davidson) was dead. Hope and Deacon have been writing each other letters, which the young mother kept a secret from everyone.

When Deacon arrives in Los Angeles, he will head straight to the guesthouse Hope and Liam Spencer (Scott Clifton) live in. According to a new preview, Deacon doesn’t appear to knock on the door. Instead, he just waltzes right in as if he owns the place. Deacon enters the cabin and drops his baggage on the floor.

Brooke and Liam look surprised, frustrated and worried when Deacon makes himself at home. The only person in the room who seems happy about the visitor is Hope. Deacon might have been invited to stay at the cabin. Why else would he just walk in with his travel bag?

The Bold And The Beautiful Spoilers – Defying Brooke Logan Forrester

The Bold and the Beautiful spoilers for the week of October 11 reveal that Brooke and Liam’s heads are spinning. Brooke orders Hope to get rid of Deacon. She also instructs Hope to tell Deacon that they can’t have a relationship. Highly emotional about the situation, Hope loudly exclaims, “I can’t!”

It seems that the Logan and Forrester families are going to have their hands full with another troublemaker. Liam shoots Brooke a look of concern and distress. In the preview clip, Liam seems to be silently begging Brooke to do something. Deacon promises that he won’t cause any trouble. However, Brooke and Liam don’t believe him

B&B Spoilers – Siding With the Enemy

Hope and Finn might have different situations, but there are also several similarities. This makes fans wonder if Finn and Hope will get even closer. We could also see Steffy and Liam lean on the one person who understands… each other.