Sean Kanan is keeping himself busy after leaving “General Hospital” as AJ Quartermaine and Deacon Sharpe on “The Young and the Restless” and “The Bold and the Beautiful.” He has two new ventures, “Beyond and the Law” and “Colonials.”

“Beyond the Law” stars Steven Seagal and Johnny Messner. Kanan will play the role of a thug. He won’t have that many lines, but he’ll be seen throughout the film.

“I have a scene where I tell a very funny joke,” Kanan said. “It’s one of the most fun moments in the movie. I’m excited about it.”

Bold And The Beautiful News – A Possible Return As Deacon Sharpe?

His second project is “Colonials.” The film’s plot revolves around a space colonist who travels from Mars to Earth. He’s on a mission to save a Resistance in the dark ages from an advance Moon enforcer. Aside from that, he’s also working to save the galaxy from human extinction. 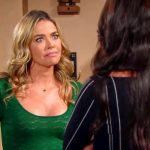 “I play a character named Zeke in Colonials,” Kanan revealed. “Zeke is a 126-year-old human from Mars, stranded on Earth. It’s a cool part.”

When asked if he may return to “The Bold and the Beautiful,” the actor said he’s open to the possibility of returning to the show if given the opportunity to play the role of Deacon Sharpe again. Kanan congratulated the show for nabbing the No. 1 spot in the top demo for five weeks.

“It’s so nice to hear that BB continues to excel. Deacon’s absolutely the most fun role I’ve ever played,” he said. Kanan is most recognized as Deacon, a character he originated in “The Bold and the Beautiful,” who then crossed over to “The Young and the Restless.”

Kanan was born on Cleveland, Ohio but grew up in New Castle, Pennsylvania. He’s part Russian Jewish and Lithuanian Jewish. He graduated from Mercersburg Academy, and studied at Boston University and UCLA for college, where he earned his political science degree.

The Bold and the Beautiful Spoilers: Thomas Goes From Villain To Victim – Brooke To Finish Him Off? https://t.co/Igo7kxgQCx pic.twitter.com/szV6Lp5lX5

Apart from making movies and appearing on soaps, Kanan also has a passion for writing books. He’s currently promoting his second book called “Success Factor X,” which he co-authored with Jill Liberman. He also loves doing stand up comedy and has presented on various comedy clubs across the country.

Emmerdale Spoilers: Mandy and Vinny Come Clean – Mandy Confident The Court Will Rule In Her Favor