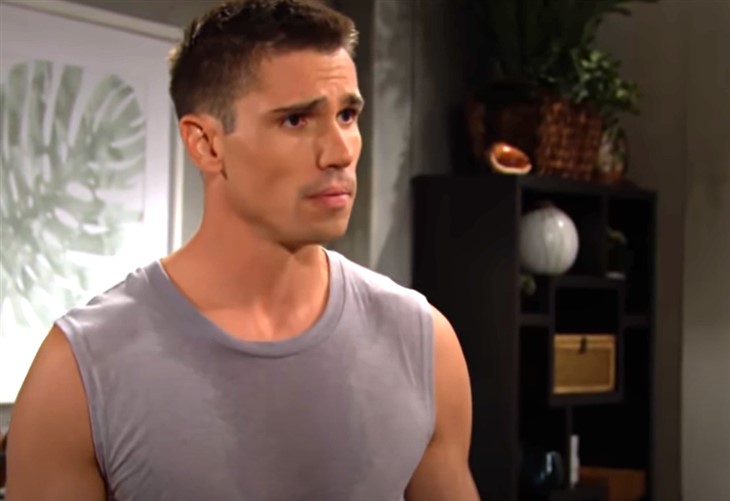 The Bold and the Beautiful (B&B) spoilers for Friday, September 10, 2021, reveal in Los Angeles Finn having to quickly decide if he wants his crazy mother or his pretty wife.

The Bold And The Beautiful Spoilers – Dr. Finn Finnegan Is So Torn

A few short weeks ago, Finn (Tanner Novlan) thought he had it all. A new adorable baby, the perfect friend moving in to help out and listen to everything he has to say, and the perfect woman to marry. She didn’t even care when he confessed he was adopted and his adopted parents loved her. What could be better?

Probably nothing, so things had to get worse. And on CBS soaps, worse is always Sheila Carter (Kimberlin Brown), the nutty nurse who first made an appearance in Genoa City in the 1990s and kidnapped Lauren’s (Tracey E. Bregman) oldest son at birth to pass off as her own. Her antics have been infamous through the years, but Finn never knew about them until she showed up at his wedding claiming to be his birth mother.

Finn didn’t do very well when he told Steffy (Jacqueline MacInnes Wood) he would never see Sheila again. He just couldn’t help himself and went back on his promise and the next two promises, as well. Now Steffy has him on the spot and tells him he better decide who he’d rather have in his life — her or Sheila. Because it can’t be both.

What will Finn decide to do? Do Steffy and Hayes mean so little to him that he’d give it all up for this woman who he knows did the most terrible things possible in her life?

After overhearing Carter (Lawrence Saint-Victor) and Quinn (Rena Sofer) together because everyone eavesdrops in the Forrester world, Eric (John McCook) decides it’s time he shows Quinn some love any way he possibly can so he plans a romantic dinner. Quinn will surely be overwhelmed and maybe even guilty for what she had with Carter. Might this romantic night also lead to more surprises — for both of them? Carter is still a part of the picture and Eric may have to get used to that. Stay tuned to The Bold and the Beautiful weekdays to see how these stories play out.

Wow!! Did Todd Chrisley Make A Hectic Judgment On A Critic?