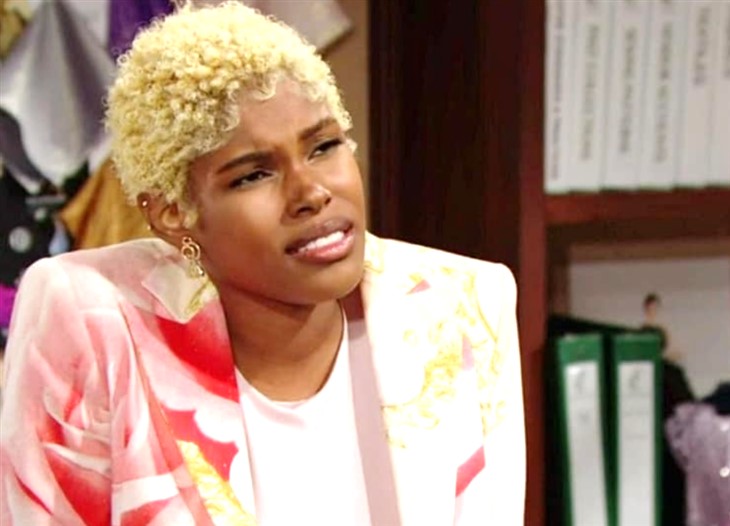 The Bold and the Beautiful spoilers reveal that Zende Forrester (Delon de Metz) questioned Paris Buckingham (Diamond White) about her crush. At the time, Paris denied having feelings for John “Finn” Finnegan (Tanner Novlan). However, during the week of September 13, Paris is surprised when she has a fantasy about Finn.

The Bold And The Beautiful Spoilers – Bonding With John Finnegan

B&B spoilers reveal that Paris moved in with “SINN” right before Sheila Carter (Kimberlin Brown) invaded the couple’s lives. Finn and Steffy Forrester (Jacqueline MacInnes Wood) are having a lot of conflict because of the villain. When the newlyweds become divided, Paris is always right by Finn’s side to “support” him. Paris is the only one who supports Finn in developing a relationship with his biological mother. As a result, the doctor continues to open up and lean on Paris.

Zende is becoming concerned about Paris and Finn’s friendship. Normally, the designer would have no issues because he trusts Paris. In the time they have been together, Paris has never given him any reason to doubt her faithfulness.

However, it seems that ever since Paris moved in with Finn and Steffy, it’s all she can talk about. Specifically, she bashes Steffy for how she is treating Finn. Then, Paris gushes about all the amazing qualities that make Finn the perfect man. Eventually, Zende demanded to know if Paris was crushing on the married doctor.

The Bold And The Beautiful Spoilers – Paris Buckingham’s Fantasy

The Bold and the Beautiful spoilers reveal that during the week of September 13, Paris will have a fantasy about Finn. This actually surprises Paris as she didn’t expect to be developing “weird” feelings for her friend. Even though this revelation is new to Paris, fans have seen it coming since she moved in with “SINN.”

The positive side of this situation is that Finn doesn’t appear to have any feelings for Paris. After all, the doctor has too much on his mind to notice Paris has a massive crush on him.

In the new issue of Soap Opera Digest, actress Diamond White says Paris knows she shouldn’t feel the way she does. Both Finn and Steffy have been incredibly kind and generous with her. The social worker will continue to struggle with her feelings and try to resolve them. Paris knows that she can’t have Finn and needs to find a way to move forward. However, sometimes that is easier said than done.

Will Paris fight her feelings or end up making a huge mistake? We will have to keep watching the CBS soap to find out what happens with this storyline.