B&B Spoilers: Eric Is Right After All – Quinn Celebrates Choice 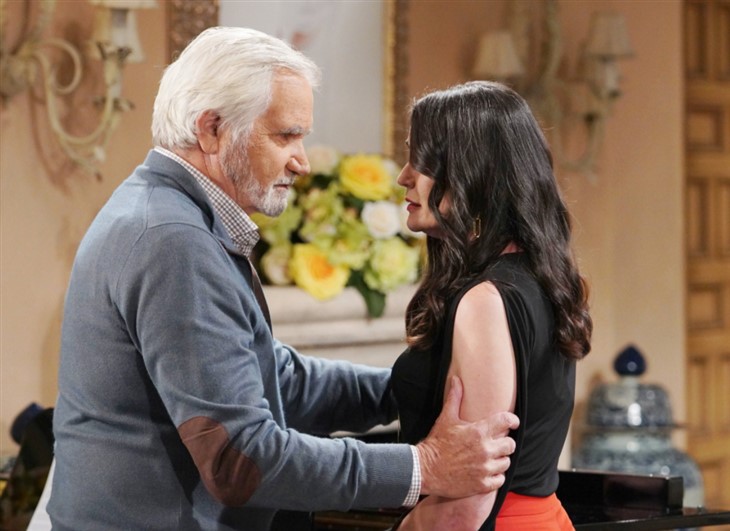 The Bold and the Beautiful (B&B) spoilers document that Eric Forrester (John McCook) loves his wife. No matter what anyone else in the B&B world thinks, on either side of the screen, that is what is most important.

Who is anyone to decide that Eric’s love for Quinn Fuller (Rena Sofer) should be dismissed as foolish? That question can be asked to the sincerely concerned, yet sometimes overbearing couple known as Bridge.

Brooke Logan Forrester (Katherine Kelly Lang) and Ridge Forrester (Thorsten Kaye) appear to have backed off, which they should. Eric is not feeble and knows what he wants at this stage of his life.

The Bold And The Beautiful Spoilers – Quinn Fuller Opens Her Heart

Quinn made some mistakes. She also broke her vow to Eric. However, she has demonstrated full contrition and proven her loyalty and love to Eric’s satisfaction.

Assume that she sticks to her word and remains by Eric’s side indefinitely. Even in that scenario, her detractors would still be convinced that Queric should not be a couple.

Eric recognized during the time of the boycotted wedding that some people were never going to approve of his romantic choice. But he has persisted.

This is soap. So, one can not rule out a Deric reunion or rendezvous. The same can be said regarding a Quarter reboot.

However, Donna Logan (Jennifer Gareis) seems to be part of Eric’s valued past. Gareis’ alter ego is not a main character. So, it is plausible that Donna’s recent, seeming revival with Eric was just a tease.

As for Carter Walton (Lawrence Saint-Victor), he is telling Katie Logan (Heather Tom) that he has never met anyone like her. He offered similar words to Quinn and Zoe Buckingham (Kiara Barnes). So, Katie is his current romantic focus, with Sofer’s character representing an ex-love interest.

Eric is not sitting in the mansion longing for yesterday. Instead, he offered Quinn a rendition of It Had To Be You with a piano accompaniment. Cynical souls were not touched, but Eric has been by Quinn. He transformed her life, as she said. That is the point of Queric.

Some may not want to admit that they are wrong. The chorus of Queric detractors can not see that they, not Eric, have been misguided. Their opinions are not decisive.

Eric and Quinn have chosen each other. That appears to be the climax plot point. Blank, black screen, end of the episode.