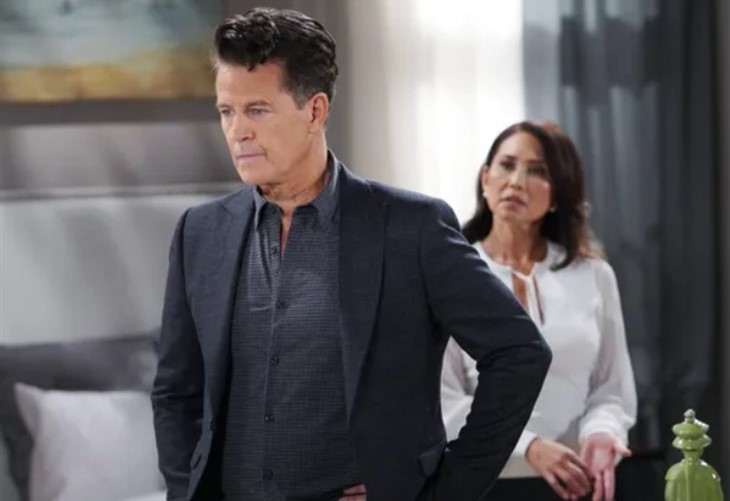 The Bold and the Beautiful (B&B) spoilers for Thursday, November 18, 2021, reveal Jack not knowing what to do when Li seems to have the same demands as Sheila Carter.

The Bold And The Beautiful Spoilers – Will John Finn Finnegan Also Learn The Truth?

Li Finnegan (Naomi Matsuda) can barely believe her ears. The son she adopted and raised since birth who she thought her husband had no relation to is really his biological father — because he cheated on her with a crazy woman named Sheila Carter (Kimberlin Brown). How could he lie to her all these years? And worse — how could he lie to Finn all these years? The man is his son and his entire life has been a lie.

Jack Finnegan (Ted King) is stunned when Li demands he tell Finn (Tanner Novlan) the truth. This is the same thing Sheila wants and even Finn is finally starting to wonder who his biological father is now that he knows who his biological mother is. Will Jack finally relent and spill all to his son? He’d be giving Sheila what she’s been asking for but he would also finally be going the right thing by his family and that may win out.

Thomas Forrester (Matthew Atkinson) can barely contain his feelings for Paris Buckingham (Diamond White) any longer. He loves having her as a roommate and he also seems to be falling in love with her — and he is very jealous of his cousin, Zende Forrester (Delon De Metz). After all, he is Paris’s boyfriend and Thomas may not stand a chance.

However, he feels he has to tell her the truth and gets ready to do so when they share quite an awkward moment. Too bad Carter (Lawrence Saint-Victor) walks in on that moment since everyone walks in on everything at Forrester Creations.

Since Carter has been known to be the other man this year, will he have anything to even admonish Thomas for? He is friends with Zende, after all, and might want to tell him to watch his back. But does anyone ask Paris how she feels about all of this? Stay tuned to The Bold and the Beautiful weekdays to see how this story plays out.

Days Of Our Lives Spoilers: Will Chanel Spill All To Lani And Abe?