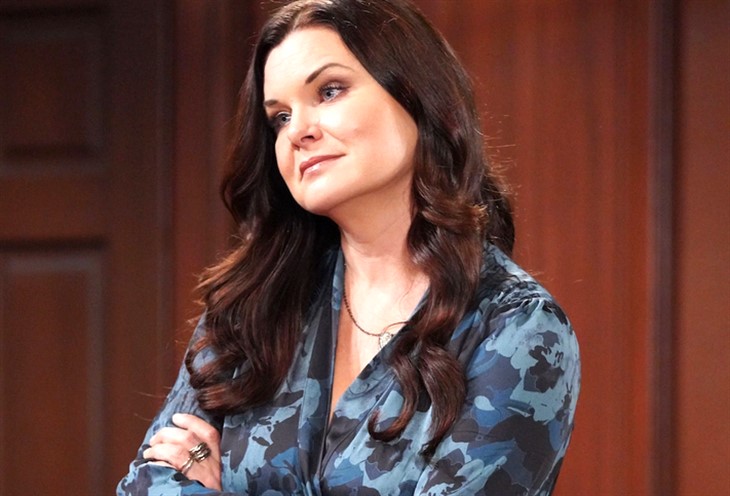 The Bold and the Beautiful spoilers document that Katie Logan (Heather Tom) loves Bill Spencer (Don Diamont). But she can not justify giving him another chance.

Carter Walton (Lawrence Saint-Victor) wanted Quinn Fuller (Rena Sofer) to be a permanent part of his life. But the intense connection they experienced appears to be gone or is at least shelved indefinitely.

Eric Forrester (John McCook) believes he has the current love of his life back. But a potentially developing storyline has Donna Logan (Jennifer Gareis) positioned as his boomerang relationship.

The Bold And The Beautiful Spoilers – Eric Forrester’s Counseling Sessions

Katie was serving as Eric’s confidant in recent weeks. Her regular visits to the mansion came about because of Quinn Fuller’s erratic behavior.

The truth has since come out, with Katie being as shocked as everyone else to learn that Eric condoned Quarter. However, the tenderness and respect that she offered to Eric through it all stood in stark contrast to how Ridge Forrester (Thorsten Kaye) and Brooke Logan Forrester (Katherine Kelly Lang) chided Eric about his marriage.

Eric’s decision to confide in Katie was coupled with his advice that she deserved a man who would cherish her. The implication seemed to be that if a Batie reunion was rejected, then a Keric pairing was possible.

Carter was mentored by Eric for years and came to be considered part of the Forrester family. Carter is Ridge’s best friend, though the Quinn issue puts them at odds right now.

Like Eric, Carter sees an idealistic version of Quinn rather than the full human being. Both men are taken by the image of Quinn in her portrait.

Carter is who Eric was in the months that followed Queric’s initial courtship. Saint-Victor’s character is smitten with Quinn, who he has placed on an unrealistic pedestal.

The Bold And The Beautiful Spoilers – Karter Or Catie Per Preference

Use either nickname or another if one likes. Applying a preemptive mashed moniker for Katie and Carter is not wishful thinking. Both people are single and vulnerable.

Teaser scenes suggest the potential of romance. This pairing is more plausible than Katie and Eric and would not be the dysfunctional triangle that Eric’s Quarter was.

Katie and Carter appear to be a good match for reasons that are both soapy and logical. This duo would also enable branch storylines to grow from it as well.