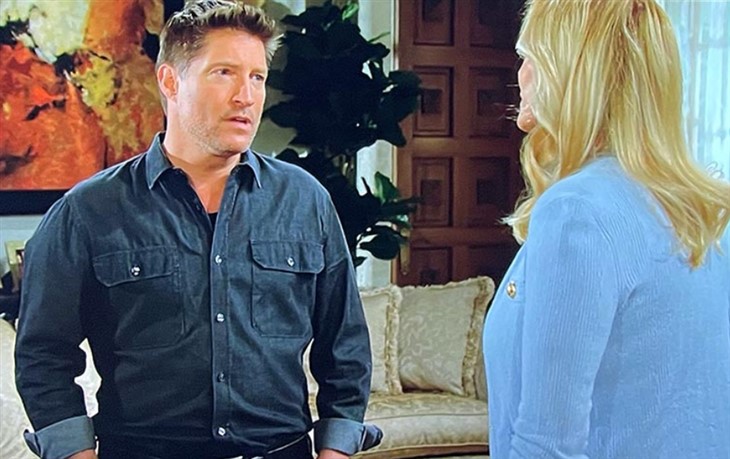 Longtime viewers of The Bold and The Beautiful know that Sheila isn’t someone one wants to get on the bad side of, and no one knows it better than Brooke! Brooke and all of the Forresters were put through torment at one time or another, or threatened, or shot, or attempted to be murdered by Sheila in the past. That is why there was such an unfavorable – “unfavorable” being the understatement of the century – reaction to Sheila suddenly turning up at Steffy Forrester Finnegan (Jacqueline Macinnes Wood) and Dr. John “Finn” Finnegan’s (Tanner Novlan) wedding and announcing she was Finn’s birth mother!

Things devolved in all parts of Steffy and Finn’s world since, and Sheila forcing the issue of Finn’s adoptive father really being his birth father didn’t help matters any! Not long after, Deacon was released from prison and wanted to be a part of his birth daughter Hope Spencer’s (Annika Noelle) life and Hope invited him. Sheila found a bonding mechanism with Deacon over this commonality, but Deacon doesn’t want anything to do with her! Viewers of The Bold and The Beautiful will recall she even tried to get him to agree to a fake romance so Hope and Finn would try to intervene!

B&B Spoilers – Deacon Finds Himself Between Sheila And Brooke, And Intervenes

Viewers of The Bold and The Beautiful will see Sheila and Brooke get into a confrontation, and Deacon will want to protect Brooke and so he’ll intervene. Deacon tolerates Sheila but he certainly isn’t best buds with her, and he’s made that quite clear to her. Instead of taking advantage of Sheila’s “hospitality” which he knows will make him beholden to her, he’s chosen to take a janitor job at Il Giardino and sleep in the supply room! However, in an upcoming episode of The Bold and The Beautiful, Brooke will not mince words with Sheila, and they’ll get into an intense confrontation. Deacon will get in between them and Sheila won’t like it!

Sheila will later plot revenge on Brooke over their argument! The confrontation is fierce enough he may have to physically separate the two of them! Taylor Hayes (Krista Allen) invites Sheila over to Christmas at the cliff house to get a chance to psychoanalyze Sheila without her knowing, and that could get back to Brooke who’ll worry about Ridge Forrester’s (Thorsten Kaye) grandchildren which of course are her step-grandchildren and tear into Sheila over that, because she won’t be in the loop and think Sheila was responsible for that plot! Viewers of The Bold and The Beautiful wouldn’t actually be surprised that Sheila herself takes credit for her victory!

The Bold and The Beautiful spoilers tease that the aftermath of Sheila’s causing trouble will leave Brooke vulnerable and hurt, and Deacon will rush in to comfort her. Whether Sheila means for Deacon and Brooke to renew their bond to one another or not, it looks like it will happen and they’ll spend the night together on New Year’s Eve.

They’ll talk about their old affair and good memories they had even though the context was horrible – longtime viewers of The Bold and The Beautiful will recall that Brooke stole her older daughter Bridget Forrester’s (most recently Ashley Jones) man, and made another daughter, Hope with him! But they did have good times together and any remaining embers could flame up into passion very easily! There could be a redo of their affair only this time she’ll want to keep it secret from Ridge. It’s doubtful that Brooke could become pregnant from this new affair with Deacon, but anything can happen in soap land!