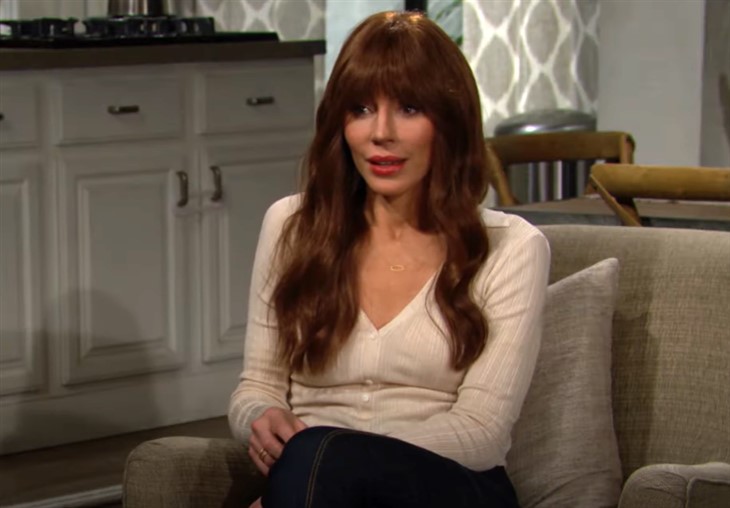 The Bold and the Beautiful (B&B) spoilers for Thursday, December 23, 2021, reveal Taylor apparently in a VERY forgiving mood for the holidays.

Since the day she got married, Steffy Forrester (Jacqueline MacInnes Wood) has been determined to keep her crazy mother-in-law away from her family. Who knew when she took those vows with Thomas Finnegan (Tanner Novlan) that she would learn soon after that Sheila Carter (Kimberlin Brown) was the biological mother who gave him up for adoption? Finn wanted to get to know the woman who gave birth to him but Steffy forbade it and Finn finally decided to cooperate. After all, Sheila shot Steffy’s mom and let the family believe she was dead for years. How could Steffy ever forgive that?

Well, maybe if her mom forgives it? Steffy is stunned when Taylor (Krista Allen) suggests that she extend an olive branch and invite Sheila to spend Christmas with the family. Will she actually listen to her mother when she has been so dead against Sheila being in their lives?

If she does, this suggestion will stun Sheila as much as it stuns Steffy. After all, Sheila is already plotting how she is going to accomplish seeing Finn and Hayes on the holiday. Imagine her shock if she doesn’t have to scheme at all.

It’s been a rough year for Hope (Annika Noelle) and Liam Spencer (Scott Clifton). Hope had to once again forgive Liam for sleeping with Steffy and possibly fathering her latest child, but Hayes turned out to be Finn’s and Hope was ready to take Liam back. Of course, Liam then ran down Vinny with his car and tried to cover it up thanks to Dollar Bill Spencer, so Liam wound up in jail for a while, but his life has been boring since his release.

Sure, Liam is not happy that Hope’s dad, Deacon Sharpe (Sean Kanan), is back in their lives, but it’s Christmas and not a time to talk about such serious things. Instead, it’s time to have some alone time and kiss under the mistletoe. Sometimes pure romance is just what soap operas need. Stay tuned to The Bold and the Beautiful weekdays to see how this story plays out.

Days Of Our Lives Spoilers: MarDevil Is Ready To Completely Destroy Salem’s Christmas