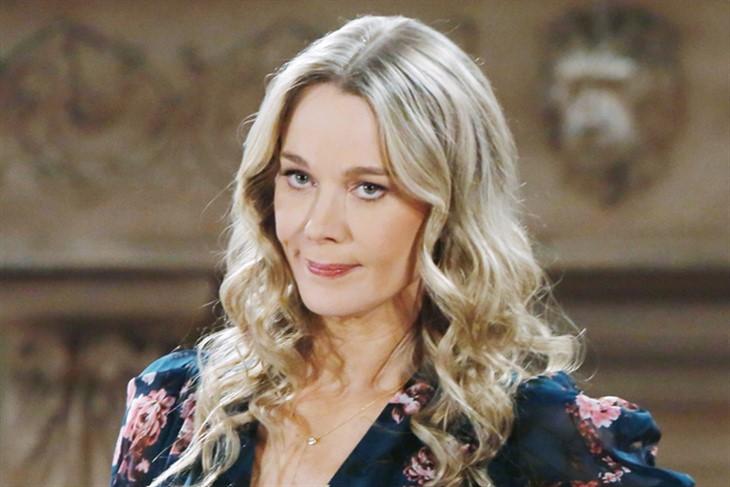 The Bold and the Beautiful spoilers reveal that Brooke Logan Forrester (Katherine Kelly Lang) is starting to get to Eric Forrester (John McCook). Even though Eric has committed to Quinn Forrester (Rena Sofer), it’s clear his heart really beats for Donna Logan (Jennifer Gareise). However, could something happen to change Eric’s mind?

The Bold And The Beautiful – Quinn Forrester’s Threat

B&B spoilers reveal that Quinn was excited when Eric came home and wanted to head to the bedroom. Although the passion attempt went limp, Quinn held out hope. However, then she overheard Eric and Brooke talking about Donna’s honey cure. That is when Quinn threatened Donna, including shoving her against a desk with a rolling chair. Of course, Quinn didn’t tell this part to Eric, but did demand that he banish Donna from their home and Forrester Creations.

Even though Eric did as Quinn asked, he wasn’t happy about it. Eric wants to keep working on his marriage to Quinn. However, that is mostly out of loyalty as it’s clear his heart really beats for Donna. Soap fans know exactly how this is going to play out. Right when Eric realizes that he wants to be with Donna after all, she will have jumped into bed with someone else!

The Bold And The Beautiful – Donna Logan Moves On

The Bold and the Beautiful spoilers reveal that fans have speculations on who Donna could get frisky with next. Some believe that it might be Carter Walton (Lawrence Saint-Victor). Even though Carter still has feelings for Quinn, he seems to be moving forward with Katie Logan (Heather Tom). Then, to complicate matters, Carter and Paris Buckingham (Diamond White) also seem to be feeling sparks. If that’s not enough, Paris is in a relationship with Zende Forrester (Delon de Metz), who is about to propose marriage. Plus, Paris also has to deal with Thomas Forrester’s (Matthew Atkinson) feelings.

Carter has already experienced the Forresters wrath when he slept with Quinn. So, he might have learned his lesson and not want to tangle with Paris. As for Katie, Carter knows her history with Bill Spencer (Don Diamont). Carter might not feel to confident about taking the woman that Bill is still pining over. So, Donna could be the next woman to end up in Carter’s bed.

If Carter and Donna end up sleeping together, Eric will find out somehow. When and if he does, it could make him have second thoughts about rekindling that romance. So, we will have to see if these two will ever end up back together or if they simply aren’t meant to be.