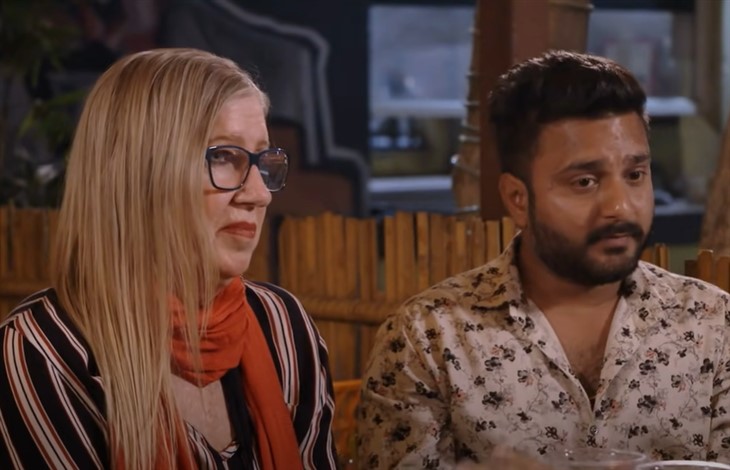 In last Sunday’s episode of season 3 of 90 Day Fiancé: The Other Way, fans finally got to see Jenny and Sumit wed. ET’s Melicia Johnson recently spoke to the newlyweds about their wedding in India and asked how things are going. They also chatted about their decision not to tell Sumit’s parents that they were married.

It has been a long and difficult journey for Jenny Slatten and Sumit Singh. For one thing, his parents didn’t approve of their relationship and the 30-year age gap between them. When their astrologer finally told them that their wedding was in their stars, Sumit suddenly got cold feet.

There was Jenny, with only a short time left before her visa expired again, and Sumit contacted their marriage lawyer to put the ceremony on hold. His cold feet were due to the trauma he experienced with his first arranged marriage, which ended up in divorce.

However, now the couple looks happy and relaxed after finally getting married. Sumit told ET’s Melicia Johnson that he is even more in love with Jenny now that she is his wife. In the interview, included below, Sumit says, “I feel so light.” He continued, “I can love Jenny more than I was doing it before. That time I was loving it too, but now I’m free. I’m so relaxed and I feel more love for her.”

Singh also said he had no regrets about their long struggle to get married, even the fact that he stopped the paperwork behind her back. Even though it had hurt Jenny’s feelings, with her threatening to go home, he says he doesn’t feel his actions were wrong at all.

“To be very honest, I felt like I was scared and I don’t want to go into a marriage I’m not ready for and I think it’s a right choice to stop it and I think that’s how it worked for us,” he said, adding, “I’m delighted that I’m ready now. I am delighted that I was able to talk to Jenny and realize that this is the time. So, I think whatever happened in the past was worth it and it’s not wrong at all.”

Ironically, despite the fact that his arranged marriage was a major scandal on 90 Day Fiancé, Sumit says it is Jenny who is helping him overcome the trauma from that first marriage. Sumit explained that she has helped him the most because when he is with Jenny, he can’t even think about the “wrong thing” that happened to him. He now feels positive and is happy as he realizes he had to work through the fear.

Sumit joked that Jenny didn’t cause the fear, saying “She’s not that bad,” and said he is experiencing the kind of partner he wants in his life. In fact, he added, “I’m living my best married life.”

As for Jenny, she said the reason she stuck with Sumit all these years is that she knew he loved her. She said, “You know, I have sense and I could feel it.”

“I mean, us women, we can feel it if they don’t love you. You can feel that and I never felt that. I never felt that he didn’t love me, not one time. So I knew he did, I never worried about it at all. I just continued on with the relationship with him because we both love each other so much and we just wanted to be together. That’s the goal,” she added.

Readers can catch the full interview with Sumit and Jenny here:

You can also find out more about Jenny and Sumit’s married life on the highly anticipated 90 Day Fiancé: The Other Way season 3 Tell-All, airing on Sunday, December 5, at 8 pm on TLC.