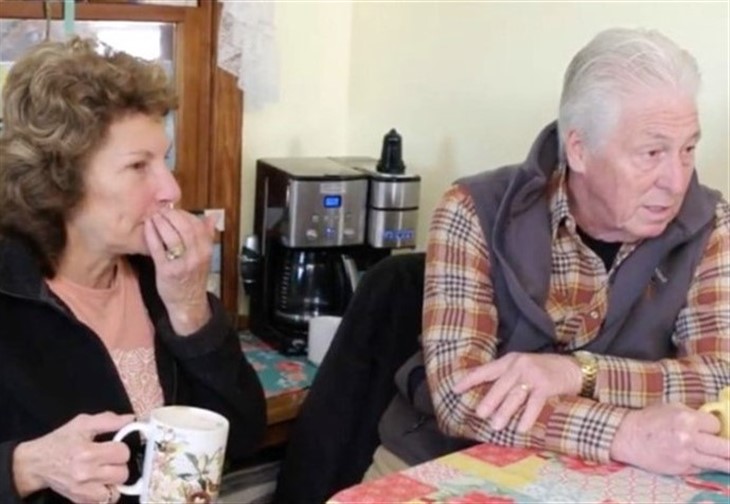 90 Day Fiancé spoilers tease that if there’s one thing that keeps any drama exciting, whether it’s reality or scripted, it’s a good old villain! 90 Day Fiancé Season 8 seems to have found two of them in Ron and Betty Gibbs, Brandon Gibbs’ parents!

As viewers of 90 Day Fiancé quickly figured out, Betty and Ron rule their countrified kingdom with an iron fist, Betty much more so than Ron. On the very first show of the season, Betty and Ron made Brandon’s trip to pick up Julia Trubkina in Washington, DC a family road trip, and Betty made an unrequested gynecologist appointment for Julia!

But there is a lot more to the couple from Dinwiddie, Virginia than just being harsh taskmasters of their son and his beautiful girlfriend. Their farm, where they have a variety of regular farm animals as well as a dog breeding business specializing in German Shepherds is called “Hummingbird Acres Farm”. For one thing, Betty’s full name is Elizabeth – Betty being a nickname.

Ron and Betty are sometimes thrown shade at over their dog breeding business, although as anyone who has ever actually bred dogs or lived on a farm knows that kennels and cages are pretty normal parts of the business. But their life apart from the farm doesn’t get a lot of talk on 90 Day Fiancé since they are too busy trying to keep their grown son and his “wild” girlfriend under control. Betty can be pretty embarrassing, pointing out Julia’s hickey for instance and Ron can be heavy-handed, scolding Julia for not being a hardworking enough “farmhand”.

The farm is real, and as previously mentioned, it is located in Dinwiddie County, Virginia. Dinwiddie County is fairly rural, with the county seat being – you guessed it – Dinwiddie, a small unincorporated town! However rural and small town the area may be, they do have Internet and they have a website for their farm. In addition to German Shepherds, they also raise Brussels Griffons, as well as sheep, goats, hogs and poultry – that’s chickens for you city slickers, although the term poultry can also refer to geese, ducks, and turkeys.

Per LinkedIn, Betty has an interesting full time job and she is listed as Elizabeth Cusumano Gibbs. She went to high school in Nashua, New Hampshire and completed a business/accounting course at J. Sargeant Reynolds Community College, followed by a biology major and physical education minor at the University of Utah. Then she worked as a business manager for fourteen and a half years at Virginia Lawyers Weekly in Richmond, Virginia.

That started in August 1990, followed in January 2005 as a business manager for Cox Radio for about three years. Currently, Betty is employed with Main Line Broadcasting/Alpha Media in Richmond as a controller since 2007. She and her husband have owned Hummingbird Acres Farm since June of 1998. Ron also went to the same community college as Betty, so they were college sweethearts. He is from Petersburg, Virginia and he works at Honda House, a car dealership in Richmond in addition to running the farm. They seem to have fairly normal lives but of course, normal is boring in the reality show world so viewers will probably never get to see that side of them!