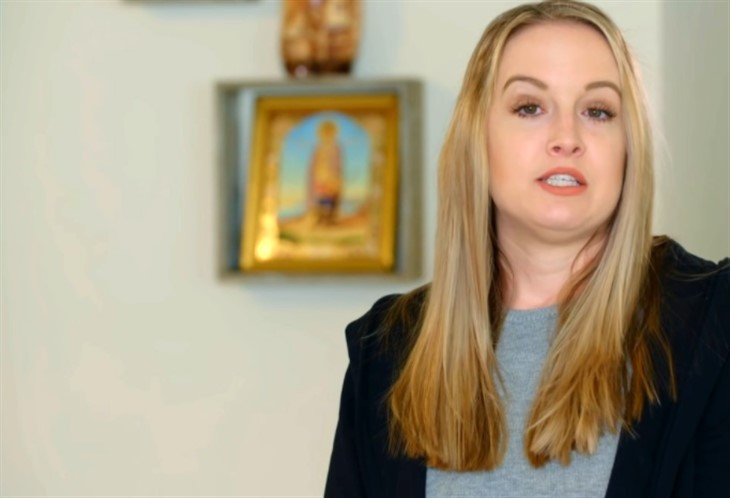 90 Day Fiancé spoilers reveal star Elizabeth ‘Libby’ Castravat is doing some major damage control this week. The reality star says that her viral OnlyFans tampon photo is fake, but the internet seems to think otherwise. Here’s what you need to know.

For some reason that fans are still trying to figure out for themselves, Libby began an OnlyFans account where she gets to show her fans and followers a whole different side to her personality. She charges $15.99 per month on OnlyFans, which is a site that allows people to post explicit content. And well, there are some other things that Libby is also putting on display, much to the horror of her followers and perhaps her own embarrassment. She might have accidentally exposed a Tampon string in a photo in which she is trying to appear ‘sexy’ for her fans. Of course, it didn’t take very long for the photo to go viral, with a lot of critics wondering why she even posted it in the first place.

In the photo, Libby is holding a glass of wine and appears to be lifting one of her legs up against a wall. Eagle-eyed fans spotted a thin white string almost immediately. Some comments from social media followers included, “There are so many things wrong with this picture! The strange unnatural pose, the ugly messy room, but the visible tampon string…Why would she post it?!”

Seeing how the speculation and the rumors just wouldn’t go away – with a lot of people even wondering if the photo was photoshopped by mean-spirited critics – Libby finally posted a video to set the record straight. She said, “I’m gonna say this one time, and one time only. The photo is fake. You can swipe up here, subscribe to my OnlyFans and see the original photo that I posted if you don’t believe me.”

Unfortunately, that didn’t stop the speculation as some critics added that they thought the fake photo might have been a ‘money grab’ to get more people to subscribe to her account. So far Libby, nor her husband Andrei, have made any additional comments about the matter.

90 Day Fiancé Spoilers: Armando Rubio Reveals He And Kenny Niedermeier Packed On Some…