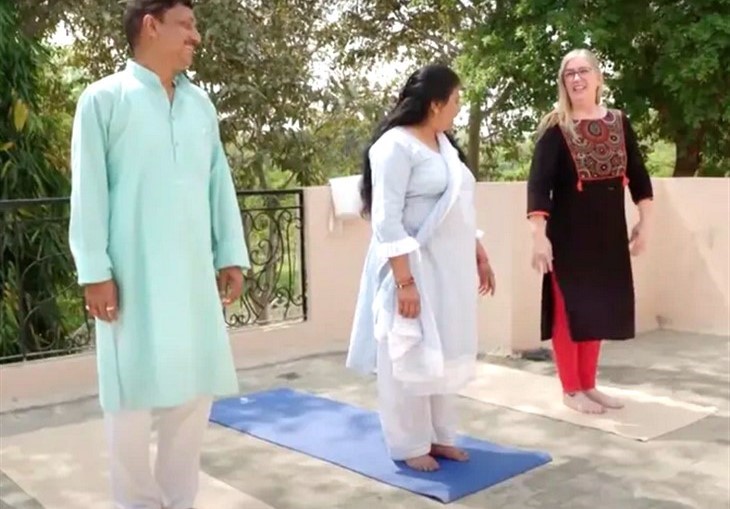 On 90 Day Fiancé, Sumit Singh truly wants his parents, Sahna and Anil, to move in with them. Jenny Slatten feels that at his age, he shouldn’t want to live with his parents, but things are different in India. It isn’t hard to see why she would be against the idea. In last week’s episode,

Sahna was trying to improve Jenny’s cooking and this week, both Sumit’s parents are trying to get her into yoga to improve her health and wellbeing.

90 Day Fiancé star Sumit Singh is keen to have his parents, Sahna and Anil, living with him and Jenny. Meanwhile, she is set against the idea. She feels that at his age, Sumit should want to live away from the family. However, he is pretty insistent in a clip from Sunday’s episode included here.

Sahna and Anil’s latest efforts are to boost Jenny’s overall wellbeing by teaching her the practice of yoga. People released an exclusive sneak peek into Sunday’s episode of 90 Day Fiancé: The Other Way. In the clip, Sahna and Anil lead Jenny, 63, in the gentle art of yoga. Let’s just say that things didn’t go well.

In her confessional, Sahna, who used to be a yoga instructor, tells the cameras that Jenny has aged a lot. However, she adds, “I think if she stays healthy, she wouldn’t get sick in the future.” Sahna, Anil and Jenny roll out their yoga mats and start their practice.

With every move, Jenny is instructed on how to properly execute the position. Meanwhile, she tries her best to follow along, but obviously finds it difficult. When it gets to a bridge position, Jenny finds it impossible to lift herself off the ground to hold the pose. She tells Sahna, “You got
me on that one.”

Meanwhile, she is impressed with her future in-laws’ skills. In her confessional, Jenny says, “You can tell they’re professional.” She adds that Sahna and Anil know what they are doing. However, Jenny also adds that they are both so flexible and her body “doesn’t want to do that.”

As for Sahna, in her own confessional she says Jenny has become “absolutely rusty” and possesses “no strength.” She added that she is around the same age, but is much better than Jenny is. Sumit’s mom said, “I can do yoga well. And what I did, she couldn’t do.” Way to make Jenny less confident!

Readers can watch the exclusive clip here on People’s website and catch the episode on 90 Day Fiancé: The Other Way on Sunday at 8 pm ET on TLC.

Y&R Spoilers: Nick And Phyllis Split But Is It Forever?