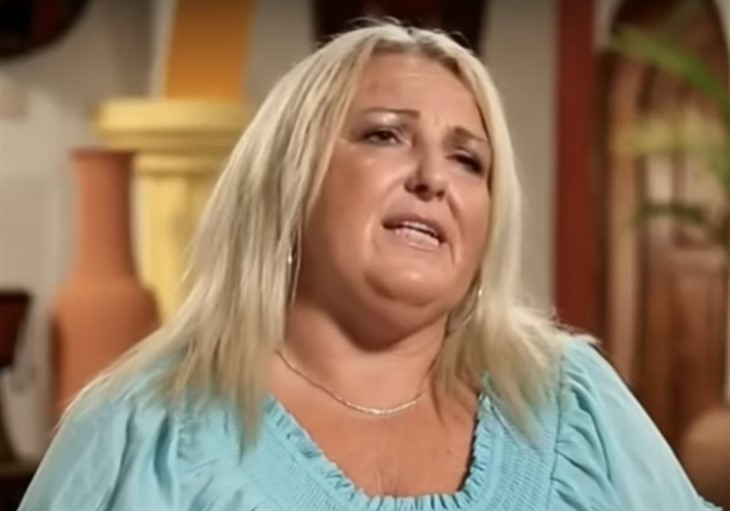 90 Day Fiancé spoilers tease that a devastated Angela Deem has been requesting prayers for family and friends with Covid-19. She looked exhausted and worried about them as the 90 Day Fiancé-The Other Way star talked about the sad situation.

No one can blame 90 Day Fiance’s Angela for worrying about her friends and family. 90 Day Fiancé viewers will remember that her mother, Glenda Standridge, passed away shortly after she and Michael Ilesanmi got married, on February 8 2020. That has to be hard on her.

One of the friends that she requested prayers for is named Sharell, who has a You Tube channel called “Sharell’s World”. Sharell has featured Michael and Angela on her show several times, which is a talk show about reality television gossip which she and her son Perry run, and another well-known reality blogger John Yates and partner Cody.

All apparently are suffering from Covid-19 although apparently Angela and her immediate family and Michael and his so far have not contracted it. Angela wanted to show love and support for her blogger friends and solicit it from her followers as well. Sharell mentions on one of her videos that Angela is one of her favorite reality stars. Angela obviously knows Sharell and her family well and is quite attached to her since she said Sharell’s illness was a huge strain on her mind and heart.

90 Day Fiance cast member Angela Deem said in her Instagram video that she believes in the power of prayer, and feels terrible for anyone who is having to deal with the often deadly virus. Angela believes the more one prays, the more God hears.

Angela Deem tells her friends she knows they are really strong, and encourages them that they will recover and that the virus will leave their home. She also promised her followers on Instagram that if she got at least 100 comments on her prayer post that she would do an Instagram Live where they could have a prayer meeting for her friends and the whole world as well!

TLC 90 Day Fiancé Spoilers – Angela Deem May Seem Mean Sometimes, But She Has A Good Heart

The frequently feisty and temper baring Angela may seem mean sometimes, but it’s obvious she has a good heart and cares about people! Those who only know her from the most recent season of 90 Day Fiancé-The Other Way and saw her frequent temper tantrums and almost abusive behavior towards her now husband Michael have to remember she was under a tremendous amount of stress back then.

She had a very ill mother at home, six granddaughters, one daughter, Skyla Deem who refused to donate an egg so Angela could “tote” Michael’s baby. Michael’s family was bearing down hard for Michael to produce an heir and preferably with a younger woman. Angela’s other daughter Scottie Deem, who is the mother of some of her children, was and still is by all accounts in prison. As if that weren’t enough Angela was probably starting into menopause and having all kinds of hormonal mood swings! Who wouldn’t go crazy and lose her temper!

Stay tuned to 90 Day Fiancé on TLC, and keep checking 90 Day Fiancé spoilers frequently for all the latest news, updates and developments!