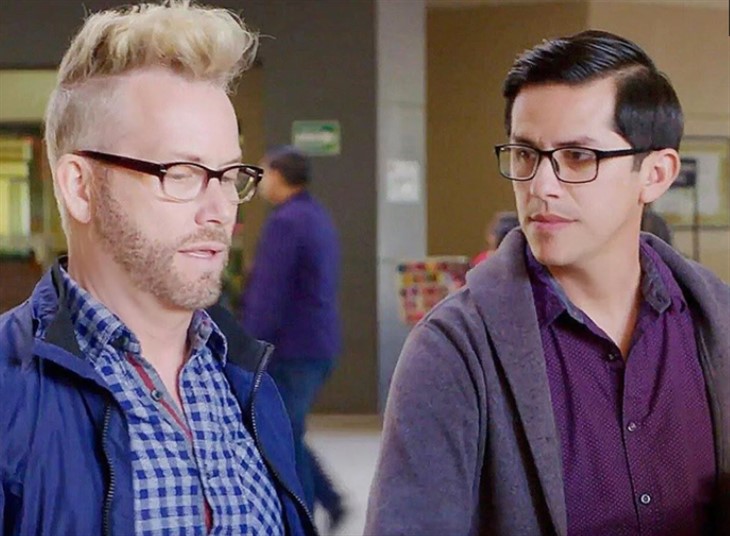 90 Day Bares All spoilers reveal that Armando Rubio and Kenneth Niedermeier have some terrible news to share with viewers. The first same-sex male couple on the show has been engaged for months and are living happily in Mexico. Armando has struggled with telling his parents about his sexuality, but it looks like he will tell host Shaun Robinson some awful news about his father.

Robinson has Armando and his mother on the show and begins to ask them very pressing questions. She asks if his dad knows about his engagement to Kenneth and Armando tells her that she needs to ask his mom. Robinson asks, “Virginia, what was your husband’s reaction when you told him Armando was engaged?” Virginia tells cameras that he doesn’t know.

Then we see Armando’s sister chime in, “My doesn’t know that? That he’s going to get married?” She is shocked! Virginia says that she never told him because he has never asked. Clearly she is hiding this from his father and is afraid that he will not approve of Armando’s relationship with Kenneth.

We will see Armando breaking down when he hears his mother’s words. “I wonder if she’s still afraid of things, if she still hasn’t fully come around. Even though time has passed, it’s like, why doesn’t he know?” Robinson then asked Armando if he would invite his father to the wedding and it seemed that he was still very upset. Armando told Robinson, “I don’t know. All I do is hope. I hope he will want to be there, truly supporting me and my relationship.”

90 Day Fiance Spoilers: What Do Stephanie & Paris Hilton Have In Common https://t.co/OjSGZSavea pic.twitter.com/KMdd8oXKw7

Armando and Kenneth met on a Facebook group for gay fathers and they hit it off immediately. They have quite the age difference, but they fell madly in love and Kenneth moved to Mexico to be with Armando. Armando and Kenneth are now raising Armando’s daughter, Hannah together and trying to make things work for them in Mexico. It hasn’t been easy, but they are doing their best.

90 Day Fiance: Before The 90 Days Spoilers: Are Ella Johnson And Johnny Still…