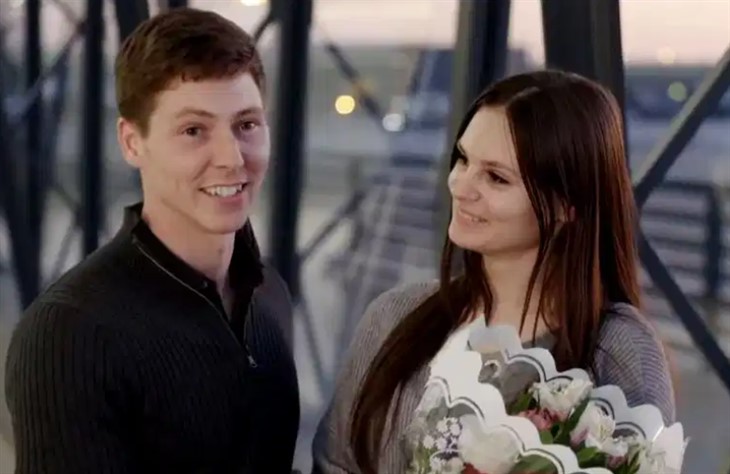 90 Day Fiancé spoilers tease that not only are Julia Trubkina and Brandon Gibbs still together, they are living their best young love life, even though 90 Day Fiancé fans have come up with many different rumors as to their current relationship status!

The young couple have faced many challenges since Julia first arrived in America. Brandon, still living in his parents’ home in Dinwiddie, Virginia brought Julia there to live in spite of his parents’ moralistic ideas. Even on the way to the airport, Betty Gibbs was determined to control Brandon and Julia’s love life, even calling to make a gynecologist appointment for Julia to make sure she was on birth control! T

hat is, if she couldn’t keep the young lovers from doing what young lovers do by insisting they slept in separate rooms! Ron and Betty even made picking up Julia a family vacation in Washington, DC in spite of her exhaustingly long flight from Russia to the United States!

In spite of separate bedrooms and tough restrictions Julia managed to have a positive pregnancy test, and fans are still speculating if by now they have a little Brandon or a little Julia! Julia was put to work on the farm and assigned chores – probably because Betty needed to keep her too tired for sex with Brandon – it didn’t work. But finally Julia reached her breaking point and threatened to go back to Russia if they didn’t get their own place!

90 Day Fiance recaps show Betty and Ron finally gave in and let them share a bedroom. It has not been revealed on the show whether or not they got their own place, but several Instagram posts on both Julia’s and Brandon’s accounts seem to indicate they have, because the house did not look like Ron and Betty’s. There were some around Christmas time of Brandon and Julia each sitting on a staircase, Brandon dressed as The Elf on The Shelf and Julia pretending to be passed out drunk, and Julia more recently posting photos from a kitchen.

90 Day Fiance’s Julia’s most recent post indicates the couple are still together, but unless they are in a much warmer climate than that of Dinwiddie, Virginia the photo was probably taken during the summer. Julia posted a photo of her wearing a big smile and a cheetah print bikini on a beach as Brandon, also with a big smile, hugs her. Every 90 Day Fiancé couple has to sign a non-disclosure agreement to not comment on their relationship status and other things pertinent to the program until after the season plays out.

On this photo, obviously meant as a Valentine’s Day greeting, she congratulates everyone on the upcoming holiday and hopes that all find someone that they will be with forever, in so many words. She also hash tagged the post with “#Brandonandjulia” which is a big clue that they are still together. Fans commented with many wishes for happiness, although one humorously commented that the photo would be complete if Betty Gibbs had photo bombed it sticking her face in the middle of the two of them!

90 Day Fiance cast member Julia promised a photo of Betty later, which seems to indicate the relationship with her potential in-laws is not all that bad. She also posted a photo of herself with a German Shepherd puppy she referred to as “her son”, and Brandon posted a photo of himself with some puppies also. The elder Gibbs do raise German Shepherds on their farm in addition to other farm animals one would normally find. It certainly appears they are together, especially the Christmas photos showing them sitting on the same staircase in different poses. But fans will have to wait for the show’s season to play out to know for sure!

The Bold And The Beautiful (B&B) Spoilers: Liam Struggles To Save Marriage – Hope Pulls The Plug?