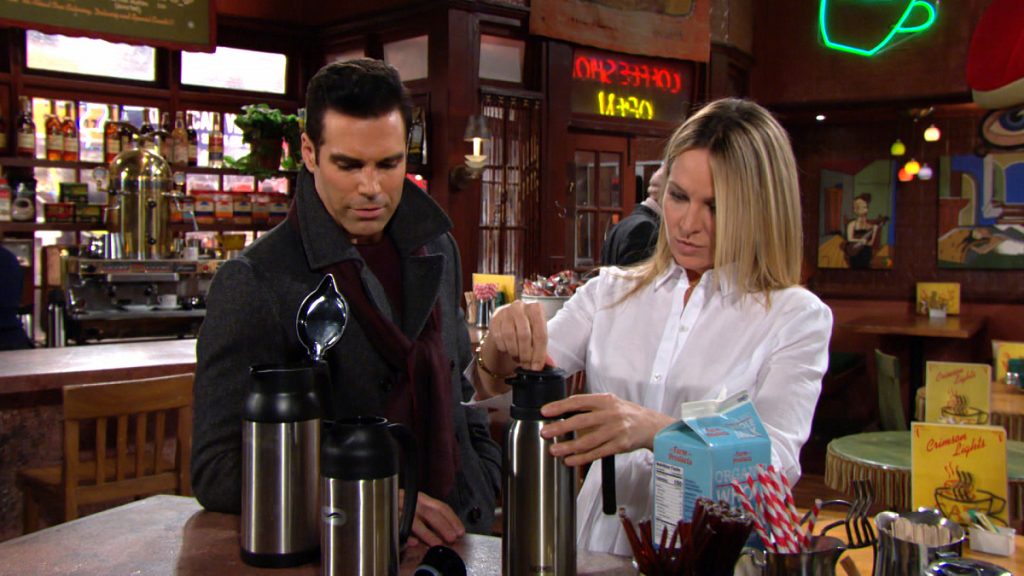 Viewers of The Young and The Restless will recall that last week Sharon found a lump in her breast. So far, she hadn’t told any family or friends and is trying to handle things on her own until she finds out whether or not the core needle biopsy she underwent shows her lump is malignant or benign (not cancerous). But she continues to be more and more nervous and on edge as she waits on the results to come back from the lab and the dreaded call from the doctor who tells her she needs to come in.

She knows if the doctor calls and tells her to come in, that it will be bad news and it will mean that she has breast cancer, because usually when doctors call it is only in cases of bad news – although some are kind and considerate enough to make time to call a patient either way, usually it is a nurse that calls or a letter that arrives with test results if there’s nothing to worry about.

Sharon’s friends and family can tell there’s something wrong – she is distracted, she is short-tempered and grouchy, and she’s unusually tired. Sharon is normally a high-energy person, on her feet at work and bouncing around among customers at Crimson Lights, and generally happy. For Sharon to act like this and require frequent breaks and even naps is highly unusual.

Some of her loved ones may suspect she is suffering from depression, although since she has a counseling degree she should be aware of her own symptoms if that is what it is. Soon, her friends and family members will begin reaching out to her and asking if there is something wrong, which at first she will deny. She may just tell them she’s got a lot on her mind – which she does but she won’t want to go any further than that.

‘The Young and the Restless’ Spoilers: Phyllis Moving Closer To Goal – Adam Newman Is In Trouble https://t.co/F6nLc51Isy pic.twitter.com/kRfNAxFnWm

Then She Gets The Call From The Doctor’s Office

Then she gets the call from the doctor’s office – the call that she has been dreading. The doctor wants her to come in to talk about her biopsy results and discuss a treatment plan. She then starts to panic and although she tries to hold it in, tears start to fall down her cheeks. Rey is there when she gets the call and she cannot hide things from his detective brain!

Detectives are well trained in body language, it is part of being able to tell if someone they are questioning are being truthful or not, and Rey knows there is something terribly wrong, and finally Sharon tells him that she had to have a biopsy on a lump in her breast, and the doctor has called her to come in and discuss the results! Rey tries to comfort her, and when she goes in to the doctor this time, Rey is with her!