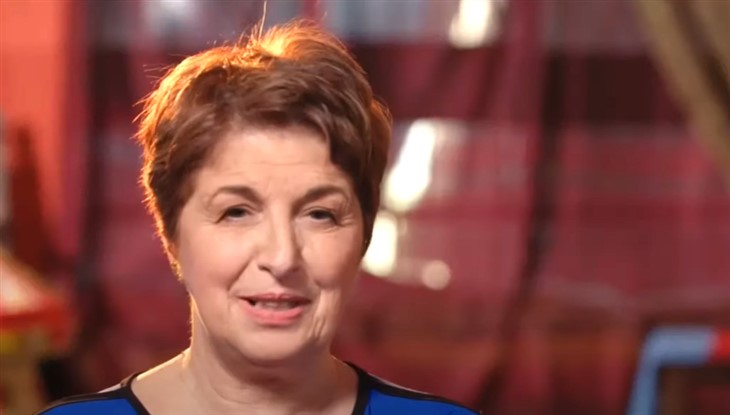 TLC’s “90 Day Fiancé” star Janice Weinberg, Ariela Weinberg’s mother, went to an Ethiopian nightclub with Ariela, to see Biniyam Shibre perform his dance routine, which is one of his jobs, but apparently misunderstood what was happening and warned Ariela to keep an eye on him!

Janice has made it rather clear that she doesn’t fully trust Biniyam, especially after she found out he previously had an American wife and child. In a recent episode, she grilled him as to why his previous wife left him, and if getting American women pregnant was a pattern! Anyone who has followed Biniyam’s history and did some internet research will find out he lived in Iowa for a short time a few years ago and accused his ex of running off with his son, who has special needs.

A couple of months ago he and a crew went to that area of Iowa and made a music video, with fans speculating that he was looking for his son as well. However, Biniyam answered her question about his ex by saying that she was overly jealous over him talking to other women, and left him, taking their baby with her.

Janice also is very skeptical that these entertainment jobs would make enough money to support a family, but that is a common concern of many people, thinking if an artistic person doesn’t work a nine to five desk job then they are wasting time and money on fantasies and needs to get a “real job”!

In a new preview of Monday’s episode of “90 Day Fiancé-The Other Way” called “Forgiven, Not Forgotten” Ariela and Janice go to a nightclub to see Biniyam in action with his dance routine, which is his “night job”. It becomes obvious that being able to provide for his family is not the only thing Janice is skeptical about!

In the nightclub, after again having buttonholed Ariela as to how Biniyam expected to support her, the two women sit at a table close to the performance action, as lights flash about the stage area, which is part of the regular floor and not raised. Janice asks Ariela if he works there every night, and Ariela answered that he did, although she deflects the question about Biniyam’s earnings from this job and refers her to him for that question.

Biniyam and his dance partner come out – the dance partner bends over a prop chair and shakes her booty at Biniyam as he approaches with a large beach umbrella rolled up! She’s wearing what Janice likely perceives as a skimpy bra and slip, although it is similar to what any dancer on “Dancing With The Stars” or an ice skating performer might wear these days or even a cheerleader!

The partner twirls around to face Biniyam as he approaches and she raises a leg, which Biniyam grabs. Janice exclaims, “Oh wow!” It definitely didn’t sound like a praiseworthy exclamation! The partner flips her upper body downward as Biniyam holds her leg like she was doing “the splits” but standing up! To those familiar with dance routines it’s obvious he is holding her leg so she won’t fall and injure herself. Janice asks Ariela who he’s dancing with, and Ariela says it’s an ex-girlfriend. Ariela doesn’t have a problem with that, but Janice certainly does!

TLC '90 Day Fiance – Happily Ever After' Spoilers: Angela Deem Leaves Nothing To Michael Ilesanmi In Her Will #90DayFiancehttps://t.co/NzxyiOk0rL

The camera cuts to Biniyam talking to TLC producers, explaining he doesn’t want jealousy problems over his dancing routines and career as there were previously, and the dancing is how he expects to support Ariela and the baby. The dancing partner continues to make writhing dance moves on the floor as Janice continues to needle, asking Ariela how long Biniyam was involved with her, which Ariela didn’t know. The two continue their dance routine as Janice expresses concern about how cute the girl is. Ariela sarcastically thanks her, and reminds her she’s supposed to be on her side! Janice says she is on her side, as Biniyam lifts his dance partner in the air over his head.

He spins her around, and Janice continues to warn Ariela that she had better keep an eye out on him, especially since he works at night when she’s home alone! A TV commercial for that episode shows a little more – with the dance ending with the partner upside down on her head doing the splits, and Biniyam appearing to spank her hard on her “coochie” as fellow “90 Day Fiancé” star Angela Deem would put it!

Stay tuned to “90 Day Fiancé-The Other Way” on TLC, and keep checking with us here for all the news, updates and gossip about all your fave “90 Day Fiancé” shows and stars!

Days of Our Lives News Update: Melissa Reeves Is Officially A Grandma! Meet Her New Grandson