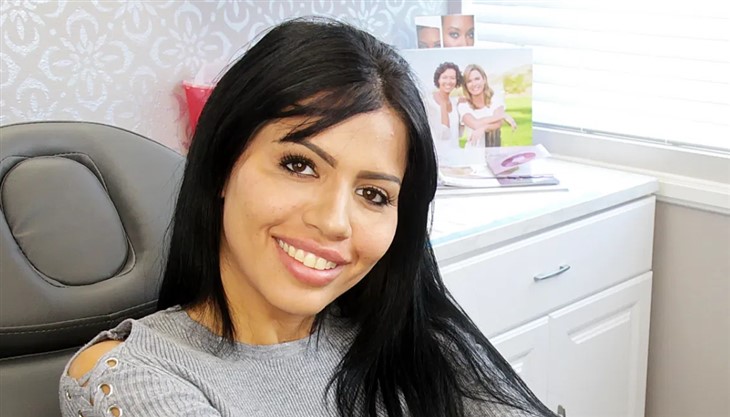 TLC’s “90 Day Fiancé-Happily Ever After” Larissa Dos Santos Lima has announced yet another surgery to her plastic surgery and botox addition – she plans on getting a tummy tuck!

Larissa doesn’t look like Larissa anymore in some peoples’ opinions, including her ex-husband Colt Johnson. He recently spoke out in an interview that he wouldn’t recognize her when comparing her to wedding album photos. Larissa has had a laundry list of bodily self-improvement projects, first losing a significant amount of weight, then underwent several botox procedures such as lip fillers, butt injections, chin and cheek implants, non-surgical rhinoplasty (nose job) and liposuction.

The photos recently posted show her displaying a totally new look, posing in high heels and a very revealing bodysuit mostly made of see-through nylon, specially designed to show her curves and cleavage. Her makeup was done professionally, with contouring and she sported long very shiny hair extensions. Her hair was pulled back and the extensions were attached in the form of a ponytail, which could be to emphasize her face.

In the captions of the group of Instagram shots, she thanked a bridal hair specialist named Meg Dela Cruz for doing her hair and makeup, and Gladditude Lashes for her false eyelashes, which were perfectly curled. She tagged Heather Rohrer of Aesthetic Medicine LV, who had performed many of her cosmetic procedures.

Fans provided mixed responses, some telling her to stop the plastic surgeries, and trying to boost her self-esteem by telling her she was beautiful the way she was, one warning her she would turn to plastic, others cheering her on and encouraging her to do more artificial beautification enhancements. Another wrote she was perfect, and while there were no warnings or anything negative about her past enhancements, that fan didn’t think she needed any more work.

Larissa also says she wants breast implants, although the next thing on her agenda is a tummy tuck – which she is in the process of scheduling. She wanted to know if fans and followers wanted her to a “vlog” –video log – on YouTube, chronicling her tummy tuck surgery. She also clarified that she is very sure she needs the tummy tuck, after being questioned about it, writing that they are seeing filtered photos and good camera angles and that she needed to have separated muscles restored.

Stay tuned to “90 Day Fiancé-Happily Ever After” on TLC, and keep checking back with us for all the news, updates and gossip on all your fave “90 Day Fiancé” shows and stars!