TLC ’90 Day Fiance – Happily Ever After’ Spoilers: Will Elizabeth’s Wedding Dress Be Modest Enough Even With The Stole? 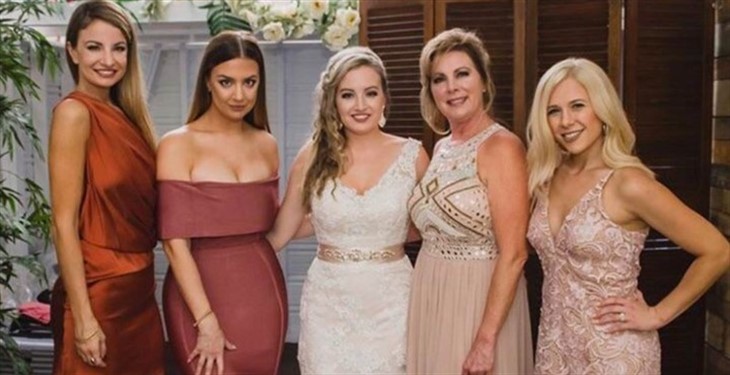 TLC 90 Day Fiancé-Happily Ever After? star Elizabeth Potthast Castravet thought she had the perfect wedding dress and the perfect solution to the conservative tastes of her Moldovan in-laws when she, her sisters and mother went to a wedding wear shop in a recent episode and found a beautiful dress and a white fur or possibly faux fur stole to cover Elizabeth’s cleavage. But will the dress be modest enough for Mr. and Mrs. Castravet even with the stole?

Undoubtedly, the stole helped a lot. The main thing that Elizabeth was worried about was covering her cleavage, and the stole certainly does that. The sleeves are long but see-through nylon with lacy pieces and embroidery and pearls, and even the dress itself is a little bit see-through in some places – including the top of it, but that part may merely be a flesh-toned liner, and if she lets her mother-in-law help with dressing her before the wedding, she will see that. If not, a white slip long enough to cover everything should suffice.

The elder Castravets should have no problem with that part if it’s lined, and the see-through sleeves should not be a problem either. However, the gown has a backless look with a row of pearl buttons down the back, and that is definitely not lined. It is sheer nylon and Elizabeth’s back can be seen clear down to her waist! Again, a full-length slip would probably solve that problem, even if it were flesh-colored, but Elizabeth and her family would feel like it would definitely spoil the look!

Elizabeth herself would likely comply for getting a full-length slip but would her in-laws demand that it be white so the slip could be observed, fearful that the priest or any other Castravet family members that attend would think Elizabeth was nude under the dress?

TLC '90 Day Fiance' Spoilers: Do Kalani and Asuelu Beat The Odds and Stay Together? #90DayFiancehttps://t.co/NIUr8sfn5L

TLC 90 Day Fiance’ Spoilers – Will Any Of Elizabeth’s Family Attend The Wedding?

(She must be thinking of renting a large suite to accommodate that many people)! She was upset about having to ask her father to pay for the Moldovan wedding, so of course, she may want to pay for their lodging if they are going to attend.

This conversation with Andrei in a previous “90 Day Fiancé-Happily Ever After?” episode implies that at least part of her family will be in attendance, even though Rebecca won’t make it. Her other sister Megan also has a baby but she has not said anything one way or the other about her plans.

Perhaps Andrei did set it up this way thinking that the sisters would make trouble with his family, and now they can’t go? Anything is possible! One can easily see an argument ensue about whether the dress is modest enough with the sheer nylon back!