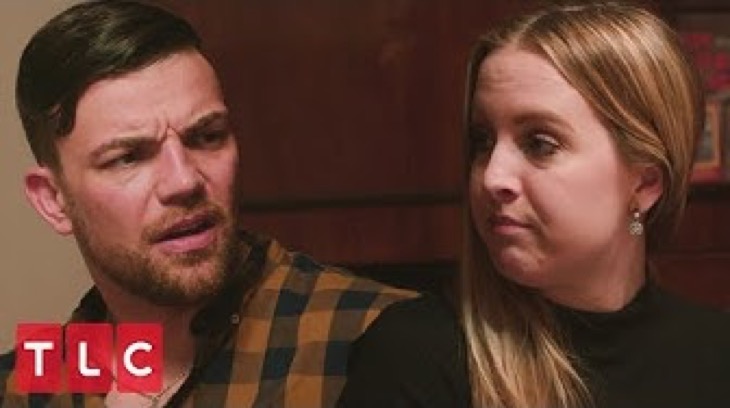 TLC’s “90 Day Fiancé-Happily Ever After” stars Andrei and Elizabeth Potthast Castravet are put on the spot, Andrei especially, when they, Elizabeth’s brother Charlie, and her father Chuck are at dinner at Andrei’s parents’ home and uncomfortable questions come up, such as “Will Andrei ever get a job?!”

Viewers will recall that when Elizabeth and Andrei picked up Chuck and Charlie at the airport when they arrived in Moldova for Elizabeth and Andrei’s Moldovan wedding, that they were headed for Andrei’s parents’ home for a meal. Andrei, Elizabeth, Andrei’s parents, and his brother Radu and wife Ina are gathered around the large table, as well as Chuck and Charlie, which is packed with food. Andrei’s mother really outdid herself this time! As they all eat, they begin to talk.

Radu mentions that Andrei doesn’t like to work so often, which brings a response from Chuck that sounds like a dig – he says that’s a real problem when trying to raise a child! Andrei tries to defend himself, saying it’s because he has a family and someone needs to stay home to take care of their baby girl, Eleanor since Elizabeth works outside the home.

Chuck continues to make comments that are thinly veiled insults, such as does Andrei expect Libby to work, and asking if that is normal there in Moldova, and is that the way it’s done over there? Radu responds, saying no, it is not normal. Ina then asks Chuck and Charlie, in Romanian, if they can’t help Andrei find a job to support his family; Andrei then translates her question to Chuck and Charlie, who look a bit offended and angry, as Andrei’s mother takes some glasses and heads out of the dining room.

Then Elizabeth joins the increasingly tense conversation, telling Andrei to tell Ina that her father had offered him a job, and he wouldn’t take it, as Chuck also verifies that he had offered him a job. Then Radu and Ina look a bit offended and ask Andrei why he wouldn’t take the job that Chuck had offered him! Chuck said it was because Andrei thought that he would control him and that he would be under Chuck’s thumb! Chuck continues, saying it was Andrei’s pride, and that he told him that when they met. Then Charlie starts talking, and takes another swipe at Andrei, saying that sitting on the couch and playing video games is a lot easier!

Charlie asks Radu what his family thinks, as Andrei gives Charlie a dirty look, and Chuck looks like he’s thinking “I told you so!” Radu gives Charlie a rather stern look as he tells him as Andrei was saying to him, America is a country of many possibilities; and then focuses on Andrei as he tells him it is a strange thing that he is staying home and Libby’s working. Radu had been thinking that it should be vice-versa, with Andrei working and Libby staying at home. Andrei says to hold on, that Libby herself had asked him to do that because she wanted someone trustworthy to take care of Eleanor while she works…then Elizabeth again interjects that she meant temporarily.

Andrei, becoming angry, tells her she didn’t change her mind until that moment, because previously she was fine with it! She accuses him of blameshifting, as some of the others try to interrupt them, and Andrei is getting irritated with her – he asks why is she marrying him the second time (referring to the Moldovan wedding) if – she interrupts him and says she’s totally fine getting NOT married the second time, as Andrei looks confused and asks “What?” and the room becomes silent again!

Stay tuned to “90 Day Fiancé-Happily Ever After?” on TLC, and check back here frequently for all the latest news, updates and gossip about all your fave “90 Day Fiancé” shows and stars!