TLC ’90 Day Fiance-Happily Ever After’ Spoilers: Dinnertime Drama Erupts As Colt and Debbie Have Dinner With Jess’ Family 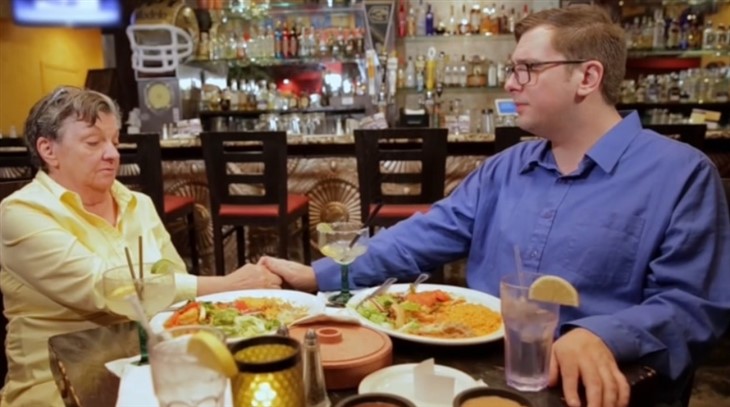 TLC’s “90 Day Fiancé-Happily Ever After?” stars Colt and Debbie Johnson experience some dinnertime drama when they come to Jess Caroline’s father’s home for a get-to-know-each-other meal in the sneak peek of the next episode, “The Best Mistake Of My Life!”

Debbie and Colt arrive at Jess’ father, Silvio’s house and meet him, as well as some other relatives there for the meal, Hans and Gisele. Gisele appears to either be Silvio’s lady friend or perhaps his sister since Jess has never mentioned either a stepmother or her father having a lady friend.

They all seem friendly, but maybe a little too friendly for Debbie’s taste, as Silvio kisses first her cheek and then her neck, which makes her blush, and she says to the producers in a separate shot that Silvio is weird, even though she was assured that the kisses were Brazilian custom. After all the introductions are made they sit down at the dinner table and traditional Brazilian dishes are brought out – meat on skewers, and a big pot of beans also with meat.

Debbie remarks she recognizes it and Jess buttonholes Colt as to whether his ex-wife Larissa Dos Santos Lima made it for him! Debbie seems suspicious of both Jess and her family, even as Silvio starts interrogating Colt and wanting to know even more about him, his past, and his intentions towards his daughter than Debbie does about Jess and her past and intentions towards her son!

It is obvious that Silvio is as overprotective of Jess and as suspicious of Colt’s motives and intentions as Debbie is overprotective of Colt and suspicious of Jess’s motives and intentions, if not even more so! Silvio wants to know about Colt’s previous marriage since that subject came up in response to the meat and bean dish being recognized by Debbie, and he wants to know how long Colt was married, and how long since the divorce, and why the marriage broke up!

Silvio seems to be very interested in the fact that Larissa, too, is Brazilian! Colt remains calm, although one can see in his face and his body language that he is beginning to get a little nervous with all of Silvio’s questions, then if Colt is not approved of then that’s the end of him and Jess! Debbie manages to keep her mouth shut through Silvio’s interrogation of Colt, although she looks suspicious the whole time, and Colt manages to stay calm as he answers all of Silvio’s questions.

TLC ’90 Day Fiance-Happily Ever After’ Spoilers: Syngin Admits He Would Not Have Married Tania Were It Not For The 90 Day Visa https://t.co/w3d1u8wgH4 pic.twitter.com/QPKC0zZyU6

The tone seems to be that Silvio might think that Colt may not be such a prize if he only managed to stay married for six months and that getting involved with his daughter only six months after the divorce might be pushing the envelope just a tad! Debbie seems to pick up on that concern as she then interrupts and asks, LOUDLY, if anyone else thinks that Colt and Jess are rushing into things!

Be sure to catch up on everything happening with 90 Day Fiance right now. Come back here often for all the 90 Day Fiance spoilers, news, and updates.