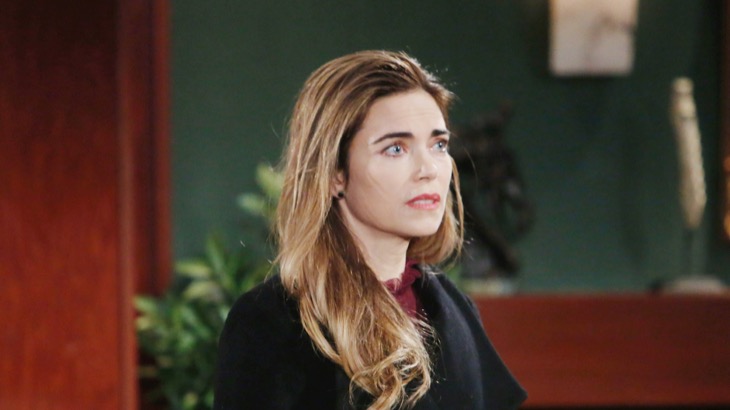 The Young and the Restless (Y&R) spoilers tease that in Genoa City, Wisconsin Victoria Newman (Amelia Heinle) misses Billy Abbott (Jason Thompson) now that he’s happy with Lily Winters (Christel Khalil). She believes that her ex isn’t thinking about their children and questions whether this is the right relationship for him.

Lily worked hard to prove Billy’s innocence. And in turn, she not only helped prove he was not guilty and freed him from jail, but she won his heart too. After Victoria saw how smitten her ex-husband is with Lily, she decides to put her foot down and urge him to end it before it ‘gets out of hand.’

Victoria thought that she was over Billy. She had not missed him very often. Young and the Restless spoilers suggest that as long as he played an active role in their children’s lives, she didn’t concern herself with what was going on in Billy’s life.

Y&R spoilers state that something changed in her when she saw how loving and attentive Billy is with Lily. She couldn’t help but feel jealous that Lily was getting that attention, instead of her.

Lily told Amanda Sinclair (Mishael Morgan) that she really hopes that Billy is feeling serious about her. Young and the Restless spoilers tease that they will get closer and closer, which will be a big problem for Victoria.

Y&R spoilers state that Victoria will see the couple together and it will sting as she realizes that she isn’t over him. She will wonder what could have been if it would have worked out the last time they split.

When Victoria couldn’t deal with her feelings of jealousy, she decides to confront her ex and directly ask him to think about their children. Young and the Restless spoilers reveal that Victoria wonders how Billy’s new relationship will affect their children. She will add that she is worried that the kids will be confused by his affection for Lily.

Billy will dismiss her concerns, pointing out that he is a good father, and he wouldn’t put them in harm’s way. Y&R spoilers suggest that the kids really like Lily, so Victoria will have to let the issue go.

When Victoria cannot use the kids to manipulate Billy into breaking up with Lily, she might look for another way. She could decide to profess her love for him, as a way to rid Billy’s life of Lily. Y&R fans doubt that breaking up Lily and Billy will be that easy!