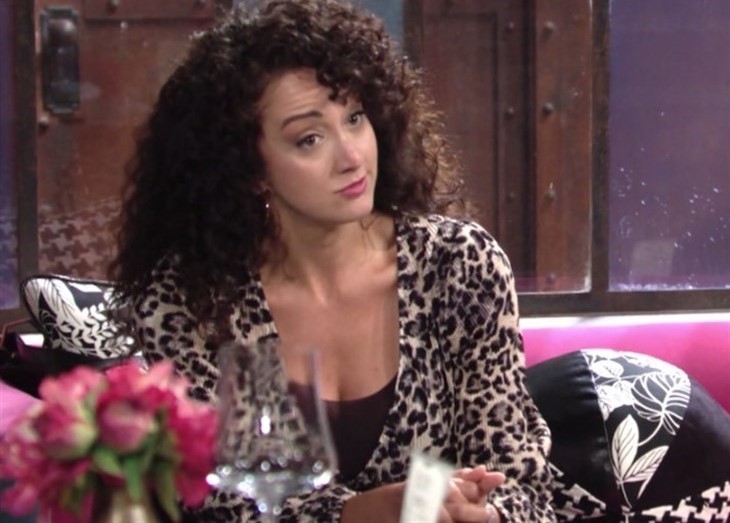 The Young and The Restless (Y&R) spoilers tease that the secret eyewitness mentioned by District Attorney Michael Baldwin (Christian LeBlanc) who saw Billy Abbott (Jason Thompson) in the area when Chance Chancellor (Donny Boaz) took a bullet for Adam Newman (Mark Grossman) will turn out to be Alyssa Montalvo (Maria DiDomenica). But the big question is, is she really the shooter and Billy just a patsy?

Viewers of The Young and The Restless will recall that Alyssa is Adam’s childhood friend from Kansas. She turned against Adam when she found out that it was an eleven-year-old Adam who killed her father, AJ Montalvo (uncredited actor) in the defense of his blind mother, Hope Wilson (Signy Coleman).

Billy had hired her to write two exposés of Adam, one pertaining to his childhood murder of her father in Kansas, and the other pertaining to his time in Las Vegas. She had found out that Adam and Chance were covering up a disappearance of a man there, which she suspected was a murder. What really happened, according to Adam and Chance, was that the man was trying to kill Chance, and Adam saved his life.

So when Chance was shot on The Young and the Restless, taking the bullet for Adam, he was returning the favor. Chance couldn’t let Adam be shot without trying to save him. He was shot as he pushed Adam out of the path of the bullet, which was from a gun a sniper was holding on top of a nearby tall office building. It may have been ChancComm, where Billy works! When Billy and Amanda Sinclair, (Mishael Morgan) whom he later fired as his attorney had the meeting with DA Baldwin, Michael advised them that there was not only an eyewitness but the bullet removed from Chance matched a gun Billy owned and was found in a dumpster behind ChancComm! Michael offered Billy a plea bargain, but he refused to take it, maintaining he was innocent!

Billy and Lily Winters (Christel Khalil) then met at Society, where Billy informed Lily he had fired Amanda! Lily gave him a reality check, telling him that Amanda had only been laying the legal cards on the table. Billy maintained she wasn’t trying to get him exonerated. Billy and Lily both are of the opinion that Billy has been framed, possibly by Victor Newman (Eric Braeden). It is a well-known fact Victor has no use for “Billy Boy” but he maintained to his daughter Victoria Newman (Amelia Heinle) who is Billy’s ex-wife, that he had not framed him. Billy and Lily realize they have to find out who framed him on their own, and set out to do it!

They find out that the eyewitness is staying in the Grand Phoenix. Billy tries to cool his jets waiting in the lobby while Lily searches the hotel to find out the witness’ identity. She finds out it’s Alyssa, and reports back to Billy. When Billy finds out who it is, he immediately goes to confront her, with Lily in hot pursuit, trying to stop him from doing something stupid! But Billy knows how to read people from all his experience gambling. He wants to look Alyssa in the eye and for her to tell him exactly what he saw!

Lily continues to try to stop him, but he doesn’t listen to her and continues to pound on Alyssa’s door! He makes enough noise that soon Rey Rosales (Jordi Vilasuso) shows up, possibly called by Alyssa. Billy lies and tells Rey nothing is going on when he demands to know. Rey then puts Billy in handcuffs and leads him to jail!

The Young and The Restless Spoilers  – Alyssa Montalvo Has No Need To Frame Billy, But She Certainly Could Have Wanted To Kill Adam Newman!

While Alyssa has no need to frame Billy, she certainly could have wanted to kill Adam! She may want to avenge her father’s death, and she could have had access to Billy’s gun. Victoria and Alyssa had gotten pretty friendly back a few months ago, and Alyssa may have known of the gun hidden in the closet.

She could have even broken in and stolen it, but the real intent may have been to kill Adam and frame Billy all along. Victoria doesn’t want anything to do with her ex-husband in spite of being mother to two of his children, and she certainly was all in on the exposés Alyssa was writing! Perhaps the two women wanted revenge, Alyssa against Adam, and Victoria against Billy, and Victoria hates Adam enough to want him killed as well!