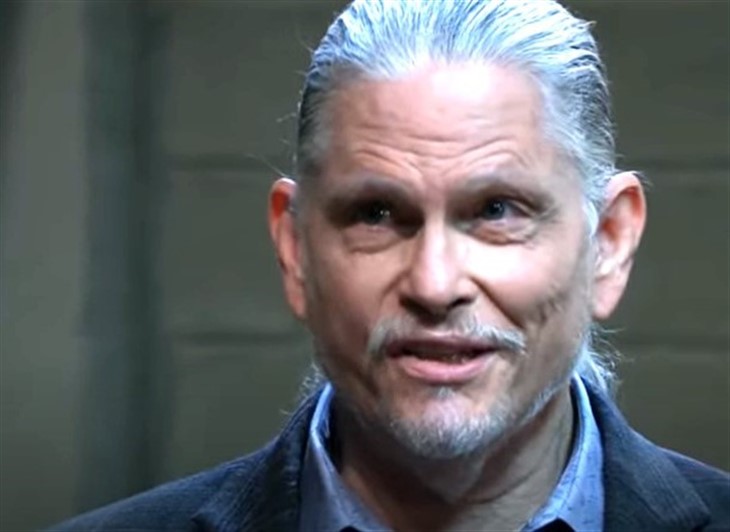 General Hospital spoilers tease that Cyrus Renault (Jeff Kober) will force Britt Westbourne (Kelly Thibaud), the GH Chief of Staff to comply with his latest order, which may be something she can simply not abide! Will she take a page out of her parents’ playbooks?

Longtime General Hospital viewers will recall that Britt’s parents are Liesl Obrecht (Kathleen Gati) and the late Cesar Faison (Anders Hove)! Either one of them would have the capacity to out-evil Cyrus by a mile! Liesl captured Peter August (Wes Ramsey) and tortured him in a cabin, after which she moved him to the stables on Spoon Island and tied him and her own niece, Nina Reeves (Cynthia Watros) to a post. Then she set the stables on fire!

Liesl is no one to get on the bad side of! Among Cesar’s crimes are kidnapping, theft, creation of a nerve gas to be used as a weapon, and he even killed his own mother Nanny McTavish (Helena Carroll) in an attempt to kill Robert Scorpio (Tristan Rogers)! He wasn’t someone to mess with, either!

There are a few things that Cyrus could try intimidating Britt into doing that might bring out her parents’ genes in her! One big one would be to order her to withhold life support from someone she cares about, such as Brad Cooper (Parry Shen)! Brad hasn’t been seen in a couple of weeks on the show, but he is likely still in the hospital recovering from his stab wounds. He was very afraid someone would kill him in the hospital.

Cyrus doesn’t like loose ends and unfinished business. He tried to pull the plug on Sasha Gilmore, (Sofia Mattsson) and he would have succeeded had a livid Michael Corinthos (Chad Duell) not pulled him out of the room! General Hospital viewers will recall that he had wanted Brando Corbin (Johnny Wactor) to take her somewhere and dump her, so she could finish dying from her heart attack, not take her to GH! It’s quite possible that he could have directed someone to finish off Brad, and perhaps do it in a way where it wouldn’t look suspicious.

Brad wasn’t on life support, but Cyrus could easily arrange a toxin to be introduced into his body that would make him look like his organs were failing, and then direct Britt to pull the plug! Britt would respond to a request like that possibly by pulling a page out of her mother’s playbook – or Brad’s, for that matter. She could do what she could to save his life and have him transferred to Mercy Hospital, and falsify the paperwork!

Or, she could find some of her father’s nerve gas and use it against Cyrus! Or, she could just get some help from other personnel in GH she trusts and who hate Cyrus too, and take him down to Helena Cassadine’s (Constance Towers) old lab in the basement. She could make Cyrus her guinea pig as she tries out Helena’s equipment and anything else she finds on him! GH viewers will recall from a few years ago that’s where Olivia Jerome (Tonja Walker) tried to summon Duke Lavery (Ian Buchanan) from Dr. Griffin Munro (Matt Cohen)!

Royal Family News: 5 Ways The Royals Would Be Different If Princess Diana Were Still Here Today