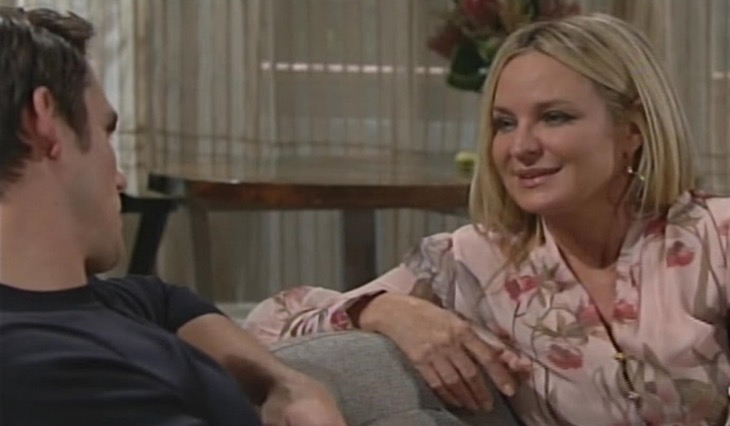 The Young and the Restless (Y&R) spoilers tease that In Genoa City, Wisconsin Adam Newman (Mark Grossman) will lean on Sharon Newman (Sharon Case) for support as he deals with Chelsea Newman’s (Melissa Claire Egan) scary medical diagnosis. For several weeks, Chelsea has been complaining about headaches and fatigue. And how could the Y&R viewers forget about Chelsea’s collapse?

Medically speaking, people don’t collapse and have reoccurring headaches unless something is very wrong with them. It seems likely that she has a brain tumor. In a few short weeks, the doctors will give Chelsea a diagnosis and it will not be good. Adam will need his family and friends-mainly Sharon- to stick by his side to support him in this difficult time.

One of Adam’s closest friends is Sharon. They have been through so much together over the years, so it shouldn’t come as a shocker that when he learns what’s wrong with Chelsea, he calls her for support. He knows Sharon cares about him, and she will want to be there to make sure he is okay.

While Rey could feel threatened by Adam’s presence, the issue is much deeper. When Adam needs Sharon, she drops everything. She gives him all the attention he needs, and let’s be honest, it’s usually quite a bit. Adam begins to take over all her time and there is nothing left for anyone else.

Previously, when Adam needed Sharon, he would take over her life. She no longer had time for him, her children or work. Her life would be consumed with Adam and his issues. Rey has had enough, and he refuses to let him do that again.

The Young and the Restless spoilers tease that when Adam starts taking over Sharon’s life, Rey attempts to put a stop to it. However, it falls on deaf ears because Sharon is so wrapped up in helping Adam during his time of crisis, she cannot see how her bond to Adam is affecting her own husband.

Rey will do what he can to protect his marriage. Y&R spoilers tease that he’s scared that Adam could cross the line with Sharon and he cannot let that happen. He won’t let Adam destroy his marriage.

It sounds like there will be some exciting Shadam scenes coming up. Do you think Rey is right for wanting to stop Sharon from supporting Adam? Don’t forget to come back for more The Young and the Restless (Y&R) spoilers, news, and casting updates!