The Young and the Restless Spoilers: Will A Newly Single Nick Reunite With Phyllis Or Sharon?

The Young and the Restless spoilers indicate that a newly single Nick Newman (Joshua Morrow) could be reuniting with one of his exes.

After dumping his girlfriend Chelsea Lawson (Melissa Claire Egan), Nick is heading into the new year as a single man. However, he won’t be lonely long.

Odds are Nick could be reuniting with one of his exes. The question is which lady will have another chance with Nick.

Phyllis Summers (Michelle Stafford) seems the likely choice. She and Nick are friends again, and have been hanging out a lot lately. Yet, she’s made it clear that she has no interest in Nick. 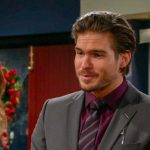 Despite the show foreshadowing a possible Phick reunion, it looks like it’s not happening since Phyllis has her sights set on another man.

The next woman Nick could reunite with is Sharon Newman (Sharon Case). Sharon is Nick’s first love and the mother of his children, they’ll always have a special bond. The two have managed to remain friends despite all the problems they had in the past.

Young And The Restless Spoilers: Rey Rosales Is In A Relationship With Sharon Newman

Shick fans would love to see a reunion with Y&R’s favorite couple, yet there’s one person standing in the way.

Sharon is currently in a relationship with Rey Rosales (Jordi Vilasuso). Sharon and Rey’s relationship has received mixed reactions from viewers. Even though Rey’s a good guy, many fans feel that he’s not a good fit for Sharon and doesn’t bring any excitement.

While Sharon and Rey seem happy, soap fans known it won’t last long. Something or someone is bound to come along and destroy Sharon and Rey’s relationship.

The Young and the Restless Poll: Who Is Chelsea's Better Option – Nick Or Adam? @celebratesoaps #YR #youngandrestless https://t.co/9VLCsWYxdW

Upcoming spoilers for the new year suggest that Nick will support Sharon as she deals with a crisis. Rumors are that Sharon will be diagnosed with cancer and shares the news with Nick first.

Sharon confiding in Nick and keeping the diagnosis a secret from Rey is going to cause problems in Shey’s relationship. Rey will feel hurt that Sharon didn’t trust him enough to tell him about her diagnosis. This will make him realize that he’ll never be Sharon’s true love.

When and if Sharon and Rey do split, it’ll pave the way for a potential Shick reunion.

General Hospital Spoilers: Cameron Shocked Over Josslyn And Dev Romance – Moving On With Trina Instead?