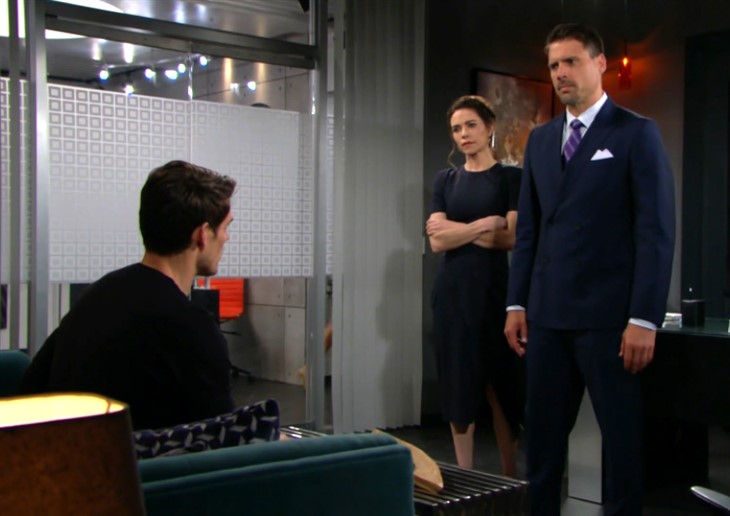 The Young and the Restless spoilers document that in Genoa City, Wisconsin Victoria Newman (Amelia Heinle) and Nick Newman (Joshua Morrow) had divergent responses to their little brother’s decision. Victoria sees it as a hopeful sign and thinks Nick and her father should be glad that Adam wants to break ties. Nick is suspicious, seeing Adam’s choice as the first move in a new game.

Victor Newman (Eric Braeden) remains disappointed in the son who bore Cliff Wilson’s (David Cowgill) name for many years while he was living with his mother, Hope Wilson (Signy Coleman), on the farm in Kansas. Victor didn’t like the implied comparison Adam made to Albert Miller (George Kennedy), but it really wasn’t that. No, Adam was thinking about himself.

Victor’s greatest strife in his life isn’t connected to Adam, as Grossman’s character might choose to believe. Instead, longtime viewers know that Braeden’s most treasured scenes, as the actor has stated publicly on various occasions, involved Victor’s interactions with his parents.

As also recounted in his autobiography, Braeden notes that the performances he offered with Dorothy McGuire (who portrayed Victor’s mother, Cora Miller, in the 1980s) and Kennedy, who first appeared in the 2000s, rank at the top of his most memorable efforts. The intensity of emotion that was delivered in the storylines that fleshed out Victor’s backstory was palpable.

If Adam wants to believe, or project, that legally dropping the Newman moniker will make his life easier, then so be it, like Victoria says. But Nick is right to question what Adam is really doing because of all that’s happened in the past.

Chelsea Lawson’s (Melissa Claire Egan) sudden departure from Adam’s life is welcomed if one chooses to believe what Adam is saying. Having his current love and son, Connor Newman (Judah Mackey), disappear at this moment in time doesn’t bode well either. Chance Chancellor (Donny Boaz) rejected both pitches his estranged friend made.

The start of this arc feels as though it could be written out for a while. Sure, Adam is expected to somehow reclaim his famous last name again someday. But a focused pursuit of whatever he’s planning, or will convince himself to do, is likely to play out first.

The Newman family should remain on guard. Chelsea might need to protect herself. As for Sharon Newman (Sharon Case), she seems bound to stay interested in whatever happens to the man she recently told she loved like no other. Adam will probably reconnect with her this fall, as Mr. Wilson takes his latest strange turn.