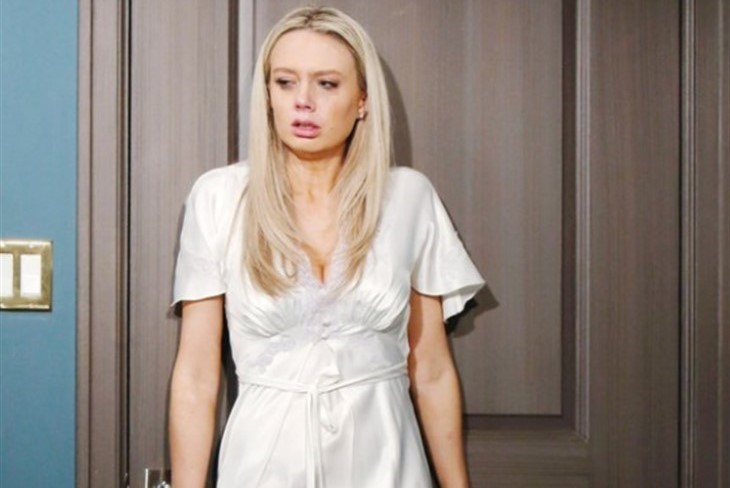 The Young and The Restless spoilers tease that in Genoa City, Wisconsin Abby Newman (Melissa Ordway) will have a meltdown as Mariah Copeland (Camryn Grimes) helps her get ready for her wedding. She goes over her past failures and everything she can think of and cries she can’t do “this” to Chance Chancellor (temporarily played by Justin Gaston). Abby’s been very emotional lately and it’s not like her – could she be pregnant?

The Young And The Restless Spoilers – Case Of Cold Feet?

It seems like more than just a simple case of cold feet or pre-wedding jitters. Abby has broken down in tears more than once lately. The first time was right after she and Chance got engaged. It’s understandable she would break down in tears and fears then. Later that day, he went after Adam Newman (Mark Grossman) and took a bullet when a sniper was aiming at him! In a few short hours, Abby had gone from the happiest she had ever been to as terrified as she had ever been that Chance would die!

But, as viewers of The Young and The Restless know, Chance survived. Not only did he survive, but wanted him and Abby to get married right away! She contacted her mother, Ashley Abbott (Eileen Davidson), and started wedding planning at record speed! Mariah pitched in as well, and now Mariah has a frantic, tearful Abby on her hands! She calls Ashley in to help, and finally, the two of them realize only Chance can calm her fears! The old superstition says it’s bad luck for the groom to see the bride before the wedding, but if he doesn’t, there may not be one! He finally gets her calmed down, but probably before she actually is in her gown, so the superstition won’t count.

Y&R Spoilers – They Have Been Trying To Get Pregnant

Abby, with her past history of miscarriage, was a bit afraid to try and conceive. She knew Chance wanted a family, and she decided to put her fears aside. It did take a good long talk with mama Ashley before she really was able to overcome her fears though. She told Chance that she had overcome her fears of another miscarriage, and had suggested they start trying right away! That may be another reason that Chance wanted to get married right away, other than having just lived through a brush with death. Abby has usually been a strong young lady, not fearful of tangling with Phyllis Summers (Michelle Stafford) over the business. Phyllis can be a formidable foe! Abby was fearless enough to play detective with Chance and impersonate Phyllis to bank officials to get into her safe deposit box!

Abby might have gotten mad, but no one ever saw her weak or in tears! She is definitely a woman who can stand on her own in almost any situation. So why is she so emotional and tearful? Since it can be assumed she hasn’t been using birth control, there is a better than even chance she’s pregnant already!