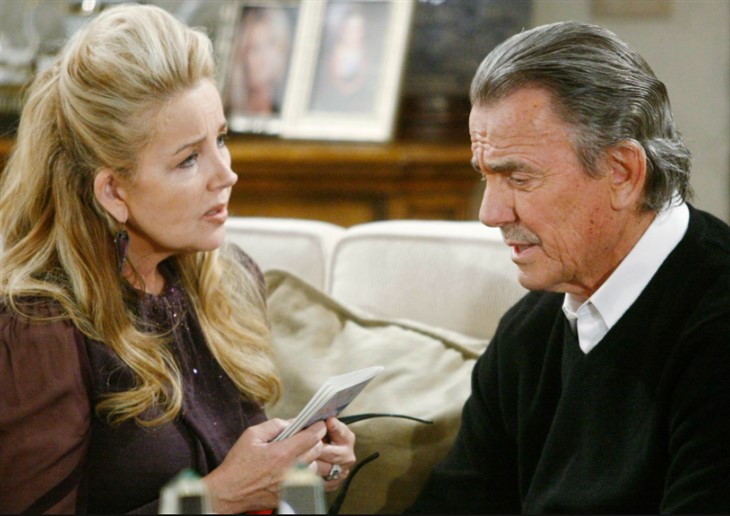 CBS The Young and the Restless spoilers document that Victor Newman’s (Eric Braeden) paternal instinct, along with the decade’s old guilt he feels, will continue to drive all that he does. Adam Newman (Mark Grossman) is fully tied to what happened in Kansas but also needs to perform an escape act where Las Vegas, Nevada, is concerned.

Nikki Newman (Melody Thomas Scott) isn’t interested in protecting Adam, who’s caused her husband nothing but trouble for years. She continues to implore the tough love approach. But the Moustache is stubborn and won’t do so, or at least not yet.

The Young And The Restless Spoilers – Victoria Newman Disappointed The Family

Victor was in his familiar chair when Victoria Newman (Amelia Heinle) opened the door to her office. Well, actually the office is her father’s. She may have chosen not to rehang the oil-based portrait of him in the Chief Executive Officer’s suite, but the rest of his aura remains there.

The founder of Newman Enterprises had his personal investigators check into some issues. That’s how Victor learned that Victoria is working with Billy-boy Abbott (Jason Thompson).

She’s put the company and family in jeopardy, or vice versa, depending upon one’s viewpoint and preference. Victor let his first-born know that she would be out if all doesn’t go well in business as a result.

Y&R Spoilers – Kansas Was About Family Too

The Young and the Restless spoilers reveal Victor never wanted Hope Newman (Signy Coleman), which was her name at the time, to leave Genoa City, Wisconsin. But she did, taking their baby back with her to the farm in Kansas.

Years later, when Adam was eleven, he defended his mother from one of his friend’s fathers. That man, A.J. Montalvo (Marcus DeAnda), died in the dining room at the farm through his actions.

The coverup that followed is exposed, which puts Victor in serious jeopardy of legal prosecution. Adam won’t take a hit for that incident because he was a child at the time. But the Vegas reveal will create different consequences entirely.

The Young And The Restless Spoilers and Rumors: Elena Becomes Pregnant After Tryst With Nate #yr #youngandrestless https://t.co/sl7SFqDYV9

Adam was far too overconfident. Meanwhile, Chance Chancellor (Donny Boaz) has been worried for months.

In that situation, Adam was again playing the role of defender. He was protecting Chance when a suspect Boaz’s character was pursuing lunged at Adam, whose response ended the man’s life.

Victor will feel compelled to go beyond Kansas because of Billy and Victoria’s zest in wanting to bring Adam down. Just like her husband, Nikki won’t stop trying. Whether she makes any progress in preventing her husband from being sucked all the way into Adam’s mess remains to be seen on Y&R.