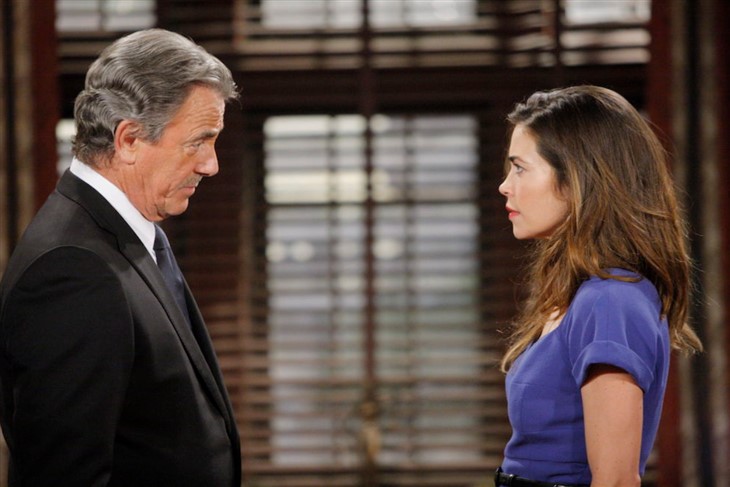 CBS The Young and the Restless spoilers document that Vickie Newman (Amelia Heinle) is aiming at her father’s heart. Her heartless act, in leaking the Adam Newman (Mark Grossman) Kansas tale, is aimed at crushing her younger brother and possibly having their father become collateral damage.

Vickie is assuming that Victor Newman’s (Eric Braeden) story is correct. He believes Adam killed a man in defense of Hope Wilson (Signy Coleman). That happened when Adam was a boy, so Grossman’s character is unlikely to face anything more than public embarrassment.

But Victor is known to have bribed a Coroner to coverup what is believed to have happened. Theoretically, he could go to jail for that crime regardless of who committed it.

The Young And The Restless Spoilers: Noah Has A Reason Not To Trust Adam

Vickie appears to be hoping that what she was told by her mother, Nikki Newman (Melody Thomas Scott), is true. But Newman Enterprises Chief Executive Officer knows that passing this lead to Billy sends him on a mission.

The two people Billy loathes the most could be brought down if he’s able to source the story and then report it through Chance Com’s media division, that’s just been emboldened by the purchase of Newman’s own media outlet.

The multi-pronged attack Vickie is making is rather clever. She sold off Newman’s media division to Billy, which will blunt the family conglomerate’s ability to respond to whatever anticipated negative news comes out about Adam and Victor in the future.

At the same time, Vickie has literally armed Adam and Victor’s nemesis. She wants to hurt Adam, because he pushed her out of the CEO’s spot, and penalize her dad.

Vickie’s feelings about Adam are Newmanesque. However, risking Victor’s freedom because he asked her to step aside for what turned out to be a handful of hours, is very petty. More dangerously, this decision could blow up in Vickie’s face.

The Young And The Restless Spoilers: Noah Has A Reason Not To Trust Adam #yr #youngandrestlesshttps://t.co/0eiBeD61mM

The Young And The Restless Spoilers – What If Adam Newman Is Innocent?

Billy believes Adam is guilty of anything. Vickie wants to think the worst of her brother but could be proven wrong. If, in fact, Adam didn’t kill that loan shark, who was trying to collect a debt from his mother, then Vickie could be sued.

Adam could hold Vickie legally responsible for smearing his reputation and causing him irreparable damage. If the public concludes that Vickie tried to engineer a takedown of her brother, based on her assumption of his childhood actions to defend his blind mother, she might be forced out of Newman by the Board of Directors, as led by its Founder.

General Hospital News Update: James Patrick Stuart Opens Up About The Loss Of A Loved One To COVID-19