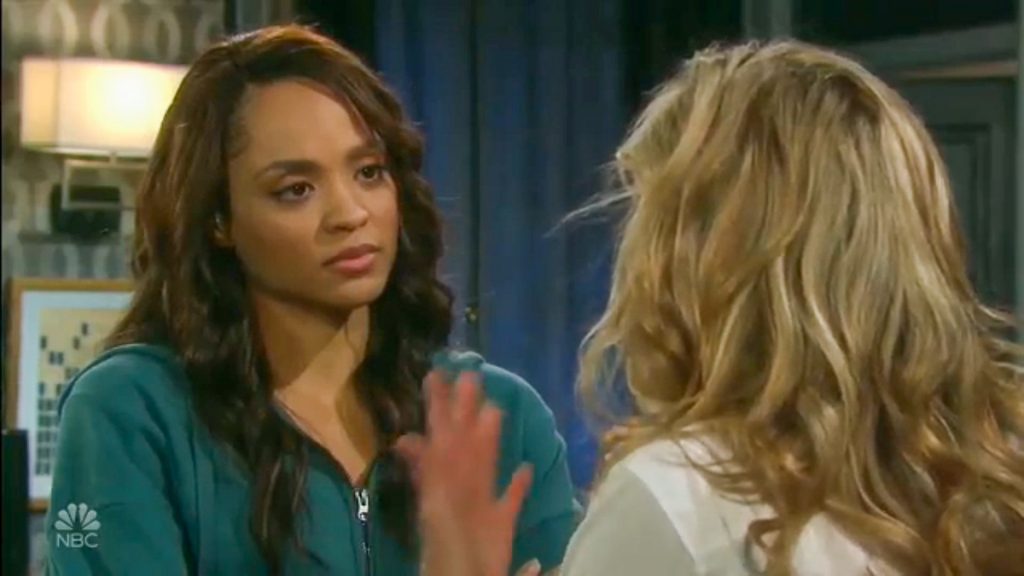 Days Of Our Lives spoilers tease that the first episode of the new year will be full of drama, suspense and surprises for Days of Our Lives viewers!

“Steve Johnson’s” (Stephen Nichols) family and friends are stunned by his return. Picking up from Tuesday’s episode, Days of Our Lives viewers could see that Kayla Brady (Mary Beth Evans) in particular was seething with anger inside after “Hope Brady” (Kristian Alfsono) brought him into Julie’s Place and he announced he was back.

John Black, (Drake Hogestyn) had a big smile on his face but it won’t last long if he starts figuring out exactly how much “Steve” isn’t himself and who he really is! Stefano DiMera (Stephen Nichols) will have to do a very good job of impersonating Steve to fool John, Marlena Evans (Deidre Hall) Kayla and even Justin Kiriakis (Wally Kurth)!

Days of Our Lives viewers will recall from Tuesday’s episode that Stefano and Princess Gina, who is presently “inhabiting) Hope Brady and has been over a year, were discussing what Stefano could do to get out of the house – or the hideout – without being exposed, since the Santa suit had raised suspicions that he was Steve Johnson – the real one – in Kayla and she had asked him if he was Steve! This way everyone will thinks he’s Steve but at least this way maybe they won’t catch on that he’s Stefano!

Meanwhile, outside Julie’s Place, Kristen DiMera (Stacy Haiduk) wants Brady Black (Eric Martsolf) back, and makes it painfully obvious that she won’t let him go! Brady reminds her of her vow to God and that they broke up and are water under the bridge, and wonders why she would still care about him. As he turns around and starts to walk away, Nicole Walker (Arianne Zucker) screams as Kristen flies into a rage and attacks her! Brady will obviously find himself turning around to separate the two women and getting in the middle of a raging catfight, complete with hisses and claws fully extended on Kristen’s part!

Outside Room 311 of the Salem Inn, where Eli Grant (Lamon Archey) and Gabi Hernandez DiMera (Camila Banus) have headed to talk to Kristen about throwing a large flowerpot through the storefront window of her “Gabi Chic” store in Horton Town Square, Gabi is shocked to see Lani Price (Sal Stowers) come to the door! Gabi had gone along with Eli to try to talk Kristen out of her DiMera shares, while Eli was investigating about the vandalism to the Gabi Chic store. Eli knocked on the door, and by the time Lani came out and approached them, they were in a clinch sharing a New Year’s kiss! Poor Lani, that’s salt in the wound!

The Bold and the Beautiful Spoilers Thursday, January 2: Hope Rattled By Thomas’ Surprise – Ridge Duped By Thomas’ Ruse With Zoe