General Hospital’s Brad Cooper (Parry Shen) has gone out of his way to cover for Julian Jerome (William DeVry) even though Julian has been involved in this baby switch for well over a year. Why didn’t Brad expose Julian’s part in the baby switch? What could Brad gain by covering for Julian?

General Hospital’s Julian wants to be close to his son Lucas Jones (Ryan Carnes). Julian has helped Brad because he claims he didn’t want his son hurt. Julian has pressured Willow Tait (Katelyn MacMullen) knowing that her child was dead.

Julian has involved Sam McCall (Kelly Monaco) in his coverup. Julian has lied to his son for well over a years. Julian almost killed his son by cutting the brakes on Brad’s car. Julian has been Brad’s right-hand man from almost the start. Why would Brad stay quiet? 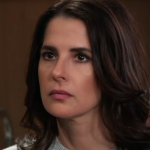 GH Spoilers – Could Cooper Brad Know About The Brakes?

General Hospital’s Brad is always covering himself no matter what he does. Brad could know that Julian cut the brakes on the car. Brad could use this information to push Julian into helping him get out of jail. Julian may not be able to take back his part in the coverup but he could keep Brad quiet about his part in the baby switch. Brad could threaten to expose Julian’s part in everything including him pressuring Willow when she wanted her child back.

Brad could tell Lucas about Julian destroying records. Brad could tell how Julian blackmailed him and tried to split him and Lucas up. Brad could literally sing like a canary and expose everything Julian has done if he wanted to. Is Brad holding back in case he needs an ally?

General Hospital’s Brad knows everything Julian has done to help him. Julian has exposed Julian for lying to Lucas before. Will Brad tell Julian’s part in everything if he refuses to help him? Will Brad continue to cover for Julian? Will Brad try to force Julian to help when Nelle Benson (Chloe Lanier) lies and accuses him of stealing her child?

Will Julian refuse to help Brad forcing Brad to tell everything he has done? Will an unlikely source help Brad despite his attempt to kill her? Will Liesl Obrecht (Kathleen Gati) help Brad in hope of Sonny Corinthos (Maurice Benard) owing to her a favor at some point? Will Liesl reveal that Brad’s story is true and Nelle is lying

Days of Our Lives Spoilers: Kristen Believes Her Baby Is Alive – Will Brady Believe Her?