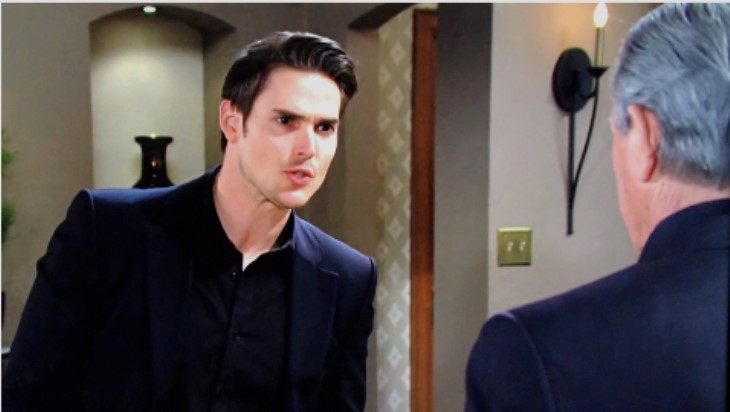 The Young and The Restless spoilers tease that the root of Adam Newman’s (Mark Grossman) and Victor Newman’s (Eric Braeden) dysfunction may simply be that they are too much alike! It may just be a classic case of a father seeing the same failings in a son that he cannot bear to admit are in himself, and that is what causes the two to clash, as many similarities between the two have been noticed by viewers of The Young and The Restless!

It was very telling in a recent episode of The Young and The Restless when Victor was talking about Adam to Nikki Newman (Melody Thomas Scott) and telling her maybe Adam would have come out differently if he had been there for him when he was still a child. Adam’s name is actually Victor Adam Newman Jr., but he didn’t find out about his birth father until he was an adult, and grew up as Adam Wilson, believing Cliff Wilson (uncast character) was his real father because he was the only father that Adam had ever known.

In the official description of Victor Newman on The Young and The Restless’ website, Victor is described as “loving and protective towards family members, but if crosses, or if Victor feels one is not living up to their full potential, then he can more than live up to the adjective that many have used to describe him as ruthless.” Victor has also been described as deeply layered with arrogance and angst, imbued with all the failings and bravado that a true villain possesses, his dastardly deeds leaving him one time responsible not only for the death of his own heart donor but for the near-death of his granddaughter Summer Newman (Hunter King) from peanut poisoning.

He’s been jailed, thrown in a psychiatric ward and shot, had amnesia, epilepsy among other events, but “like all villains worth their salt, he’s survived it all and inspired respect, if not adoration.” He has faked his death several times, the most recent to guilt-trip Adam into learning a lesson, while devastating his other relatives, not in the loop like his granddaughter Summer!

Victor later left Genoa City and traveled to Kansas, letting Nikki Newman (Melody Thomas Scott) and the rest of the Newman family believe he had died. He met Hope Adams (Signy Coleman). Victor and Hope’s romance was cut short when Hope revealed that she was engaged to her longtime friend, Cliff Wilson. They eventually returned to Genoa City and married.

Victor and Hope later have a son, Victor Adam Newman Jr. Hope wanted to return to Kansas and Victor was not interested; he divorced her and Victor Jr. was raised without knowing Victor was his father. Victor suffered injuries from a gunshot wound. He left town after his recovery, and he visited Hope in Kansas. She was then married to Cliff Wilson, who adopted Victor Jr. and changed his name to Victor Adam Wilson. Victor spent time with his son during his visit, but Cliff was adamant that the boy believed that he was his father. Victor soon returned to Genoa City and his longtime love, Nikki. Suddenly, Victor received word that Cliff was hit by a drunk driver.

He went to Kansas to support Hope, who was devastated when Cliff died from his injuries. Nikki ended her relationship with Victor when she believed that he left her for Hope. Adam’s off-screen background was established to reflect that of his father; the character was highly self-motivated, studying at college and beginning a career in finance. Adam has been involved with his brother’s ex-wife, Sharon Newman (Sharon Case)—a relationship that was dark.

Adam stole Sharon’s newborn baby, Faith, and gave her to Ashley Abbott (Eileen Davidson)—whom he caused to have a miscarriage and a phantom pregnancy. Despite knowing this and seeing Sharon grieve, Adam bonded with her out of guilt; however, they fell in love and married. Sharon remained in love with Adam after his kidnapping of Faith was revealed. Sharon’s family and friends, as well as Adam’s, viewed him as a criminal and were displeased with the romance.

Young and the Restless Spoilers: Nick Knows Adam’s Up To No Good – See What He Does https://t.co/34goXTWD4S pic.twitter.com/gyCnX5Va9y

He later became involved with Chelsea Lawson (Melissa Claire Egan) and they married, lived in Kansas for a while and had a child together, Connor Newman (Judah Mackey). Then, after Adam accidentally ran over and killed Delia Abbott (Sophie Pollono), her father, Billy Abbott (Jason Thompson) went after Adam, and He holds him at gunpoint and demands he drive them to places where milestones in Delia’s life occurred. While driving, Adam attempts to grab the gun as a shot is fired and the car drives off a ravine.

One of them staggers away from the crash and collapses, revealed to be Billy. Nick and Paul Williams (Doug Davidson) find the overturned vehicle as it catches fire and explodes. Adam’s body is thrown from the vehicle, is not recovered and he is presumed dead, devastating Chelsea just as news that Adam killed Delia breaks. However, Adam’s bloody hand is later shown to be moving, alluding that he survived. Soon after, he is shown to be lying in a bed, being held captive by an unknown captor.

Later Victor informs Chelsea that his investigators have found Adam’s remains, but elsewhere Adam is seen paying off Victor’s investigator, confirming that Adam has faked his death. Later, Adam moves to Las Vegas, where he lives for a time under the alias “Spyder” supposedly suffering from amnesia. Given all these similarities in Adam and Victor, does it not seem reasonable that they don’t get along because they are too much alike?