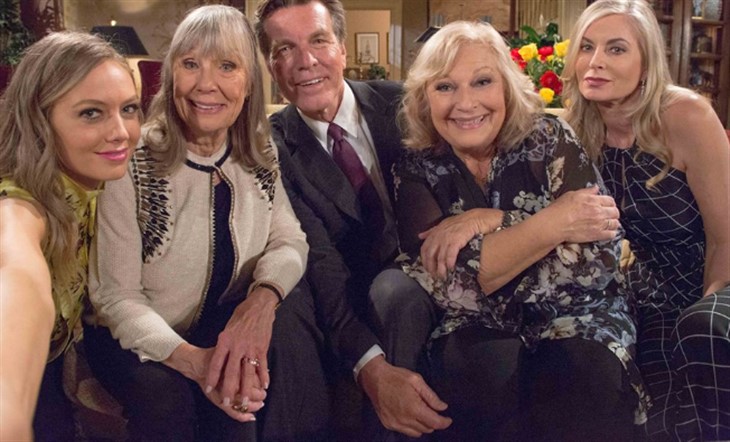 CBS The Young and the Restless spoilers tease that the show will return to the air with a story about the Abbott family that will bring a blast to the past and at the same time a potential romance for Ashley Abbott (Eileen Davidson).

What in the world is going on with the Abbott clan? The action centers around Dina Mergeron (Marla Adams), the family matriarch before she left the fam to go sow her wild oats.

Now she is back home in the mansion she hated and ran away from, but her family is insistent that she lives out her final days there.

Explosive show spoilers tease that the show is about to embark on a scintillating story in which the Abbott kids go on an adventure to bring Dina closure. She is battling Alzheimer’s and her time is winding down. According to TPTB, an exciting plot revolves around a mysterious memento from her happier days with John Abbott (Jerry Douglas).

Apparently, Jack Abbott (Peter Bergman) and Traci Abbott (Beth Maitland) will search for the memento that was once symbolic of their parents’ love.

Y&R Spoilers – What Kind Of Memento Are The Abbott Kids Looking For?

Will this memento not only bring joy to Dina but perhaps a spark of happiness to her kids’ lives? Could be! It is also said that Ashley will be a big part of the adventure. This sounds like an exciting storyline, full of intrigue and unexpected twists and turns.

On the one hand, it is nice to know that Dina will still figure into the storyline as the show returns to the air. She has been struggling with her disease lately, but her kids clearly will do anything they can to make her final days good ones.

August 10 marks the return of the CBS sudser to daytime, with all-new episodes to show. It has been months since the show went on hiatus and during that time it took to airing repeats due to running out of new content.
Based on the spilled details about the Abbott clan, and other scintillating upcoming plots, it looks like fans will be able to sink their teeth into some dramatic and enjoyable storylines as the summer winds down.

So, Y&R fans, tell us what you think this mysterious memento will turn out to be!