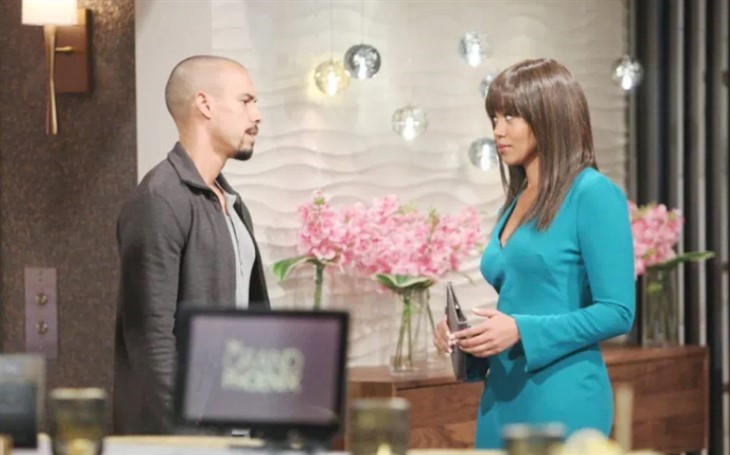 The Young and the Restless spoilers divulge that Devon Hamilton (Bryton James), Elena Dawson (Brytni Sarpy), Amanda Sinclair (Mishael Morgan), and Nate Hastings (Sean Dominic) are all about to go on a roller coaster ride full of intrigue and dramatic consequences.

The show returns to the airwaves with brand new content on Monday, August 10 and it appears that the sky is the limit as far as scintillating storytelling and jaw-dropping suspense is concerned, particularly when to comes to these four entertaining and lively characters.

The Young And The Restless Spoilers – Devon, Amanda, Elena, And Nate Are All About To Discover A Secret That Could Forever Change Their Lives

Head writer Josh Griffith recently spoke to Soap Opera Digest and he spilled some remarkable tidbits about these four core characters. When it was mentioned that Elevon fans seem happy that the couple is in blissed-out mode, he cautioned that shakeups are a part of the soap landscape! Uh oh, are fans about to be shaken to their core by a break up of this popular couple?

He didn’t say that so we can’t assume anything. But Griffith did say something equally mysterious and provocative about the foursome.

Y&R Spoilers – Will There Be A Shakeup In The Status Of Devon And Elena?

The head writer spilled that there is a major story coming up for Elevon and Nate and Amanda. This could mean a switch-up in partners, with Devon being attracted to his wife’s lookalike and Elena and Nate bonding over their medical careers.

Then again, it could be something entirely different and completely shocking!

The Young And The Restless Spoilers – Will Fans Finally Find Out Who Amanda Sinclair Really Is?

That’s because Griffith said that stunning secrets will be revealed and they will lead to surprising outcomes for everyone. Could this mean that the secret about Amanda’s identity is about to be revealed? She is a dead ringer for the late Hilary Winters; is there a jaw-dropping connection between them?

We also don’t know very much about Elena, other than that she is a caring individual who came to town and could very well become a billionaire’s wife. What skeletons are in her closet? I have a feeling we are about to find out!

The Young And The Restless Spoilers: Amanda Pushes Nate Off – Billy Is Hopeful #yr #youngandrestless https://t.co/i7kyx3NAxr

We want to know what you think about this plot Y&R fans. What do you think will be discovered about this group in the coming days?