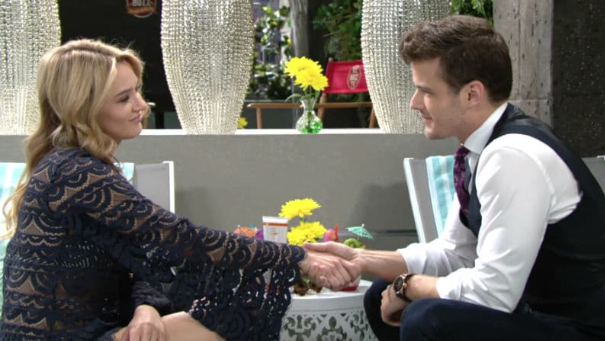 The Young and the Restless spoilers document that Summer Newman (Hunter King) has never stopped loving Kyle Abbott (Michael Mealor) and still wants to reunite with him, even after they agreed to keep their kiss a secret. While Skyle still seems like a fond memory for her, Summer is inching closer to her goal of reigniting a relationship with Kyle than she recently thought possible.

Summer decided sometime after the Kola wedding that Lola Abbott (Sasha Calle) had a hold on Kyle’s heart. Summer had convinced herself to be content just being friends and work colleagues.

Theo Vanderway (Tyler Johnson) thinks he lived a vastly different life than people like Summer and Kyle. He resents their upbringings and is trying to exact retro revenge as a result. One of the ways he’s going about doing so is by focusing his gaze on Lola, which could result in Summer gaining another chance with Kyle.

The Young and the Restless Spoilers: Sharon And Phyllis – Reality Flips The Script

Lola is a different person than Theo, even though she recognizes that they do have somewhat similar backstories. She also understands that Theo has a crush on her, which has projected trouble for awhile.

There were some growing pains when Lola and Kyle were developing their relationship. Lola felt that his well-heeled lifestyle wasn’t one she’d be able to adapt to, or possibly, accept. An infamous expensive gift Kyle bought for her highlighted that temporary dilemma.

Theo has recently been mining Lola’s thoughts. He’s hit on her insecurities as a means to create a wedge between her and Kyle, with the intent on exacting revenge for past dealings with his realized cousin.

Theo blew off Summer toward the end of last year. There was an incident where Summer mistook his words as a request to live together in a more committed relationship and rejected it out of hand.

Johnson’s character was initially into Summer, but he’s since placed her clearly behind Lola since developing his crush. King’s character senses that, as does an increasing number of other people, including Mariah Copeland (Camryn Grimes). Grimes’ character recently agreed to help Summer keep an eye on Kyle, which should prove to be a plus moving forward.

Being alone has affected Summer more than she expected, or realized. Then, the Jabot business trip happened and where everyone is now.

The first edition of Skyle happened years ago when Lachlan Buchanan (Kyle) portrayed the character. Mealor’s recast version was still interested when Summer wasn’t, following King’s return to the cast a few years ago.

The possibility of another Skyle edition would likely be a new view. Assuming Kola separates is still a stretch. But if that happens, then Summer and Kyle have the ability to be together in a more nuanced form.

Survivor Fans Troubled by Idols on the Show, Feel There Are Too Many – Will The Show Change?