The Young and the Restless spoilers document that Sharon Newman (Sharon Case) has been fighting cancer. So far all is going well physically, as the disease isn’t believed to have progressed. However, her mental battle, which includes presenting a good front for family, is tough.

Faith Newman (Alyvia Alyn Lind) is struggling. Lind’s character left boarding school, which she loved, to support her mom. It was the right thing to do. But the compassion she’s demonstrating also comes with a side effect. Faith is witnessing Sharon’s day-to-day fight, which is impacting mother and daughter. 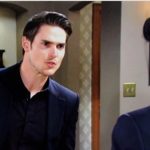 Rey Rosales (Jordi Vilasuso) is fully supportive of Sharon. Shey appears to be on a trajectory that would have them marry sometime this year. Hopefully, that happens by summer, when Faith believes her mom will have beaten cancer.

The Young And The Restless Spoilers – Sharon Newman Balancing Life

Sharon was a very productive resident of Genoa City, Wisconsin, before she received her shocking diagnosis. The longtime owner of Crimson Lights was also serving at the police station, where she worked as a crisis hotline volunteer. That was combined with her pursuit of a realized degree that allows her to work as a licensed therapist.

Of course, Sharon’s role as a mother to her children, Mariah Copeland (Camryn Grimes), Noah Newman (Robert Adamson) and Faith has always been paramount and vital. She’s been there for those beloved offspring, which enables natural reciprocation during this time of need.

Case ranks with the best actors in this genre. She’s held that status for many years, after initially debuting on Y&R in 1994, along with Joshua Morrow (Nick Newman). Sharon and Nick’s initial storyline and the growth of their family holds a key place in this show’s history, which reflects equally well on both great actors.

Choosing Case to handle this arc was wise. She’s already demonstrated the depth of range in her performances that will only deepen as an expected, more serious stage of Sharon’s treatment unfolds.

The Young And The Restless Spoilers – Potential Outcomes Must Be Considered

Having Sharon survive, with a modest amount of stress, would be terrific. But pursuing that plot path would exclude the incorporation of the challenging real-life situations many cancer survivors have endured on the way to total victory.

Young and the Restless Spoilers: Billy Has Competition – Nate And Amanda Grow Closerhttps://t.co/jABhYax0L6

If Sharon is to have an extended period of suffering, Faith, Mariah, Rey, Nick, Vickie, Nikki Newman (Melody Thomas Scott), Adam Newman (Mark Grossman), and even Victor Newman (Eric Braeden), among others could all become part of her support system. Assuming that happens also means that a terrific collaborative effort will be seen.

No confirmed information exists that even suggests Case is leaving the cast. If she is then Sharon’s cancer outcome will move beyond dire.

However, a departure can’t be assumed. That likely means Sharon will survive after an unknown treatment period and through a full recovery.