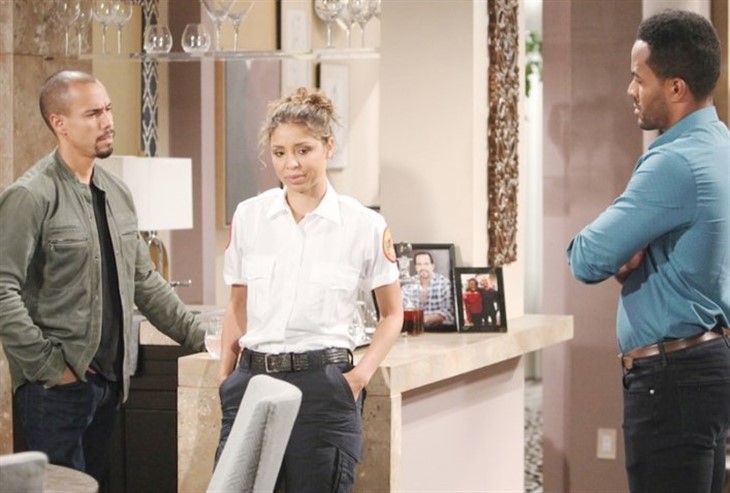 CBS The Young and the Restless spoilers document that in Genoa City, Wisconsin Nate Hastings (Sean Dominic) may prove to be the better match for Elena Dawson (Brytni Sarpy). It’s also possible that her subconscious mind sensed this possibility and created a way to explore whether Nate is actually the deeper soul mate.

Devon Hamilton (Bryton James) is surely crushed. The woman he firmly believed supported him and a cousin he considered a prime confidant betrayed his trust in a shocking fashion.

Nate seems to have been harboring developing feelings for Elena that were evidenced the other night at the New Hope clinic. And with that choice, he ruined his relationship with Devon and may have damaged his career because of tendon damage in his injured hand.

Devon really took his time after Hilary Hamilton’s (Mishael Morgan) death. He didn’t rebound into another relationship but slowly came to know Elena.

Their bond created one of Y&R’s most likable couples. It was one that seemed almost certain to at least remain together for a while longer, if not result in an engagement in the coming months. But those hopes have crashed.

Elena’s insecurities were Amanda Sinclair (Morgan) is concerned created significant internal tension. She wasn’t convinced that Devon wouldn’t eventually be romantically tied to Hilary’s sister, though no factual evidence underscored that choice. However, love and all related issues aren’t and can’t be measured.

The passing of Nate’s girlfriend, prior to his return to Genoa City, Wisconsin, obviously resonates through today. He seems to have possibly mixed his loneliness in with whatever feelings he now has for Elena.

Nate’s recent comment to Devon, about considering letting Elena go, was a foreshadowing. Devon thought that advice was odd, but later realized it didn’t come out of the blue.

Devon didn’t see any signs of the potential for an emotional match between his cousin and Elena, even though they’ve become good friends, share the same profession, and have been spending a lot of time together at the clinic. Devon’s miss is explainable, but it’s also a mistake he won’t make again.

The Young And The Restless Spoilers – Elena Dawson Will Pull Through

It’s already been very hard for her. But Elena is a strong person. Some of the tears she’s shedding may represent an eventual acknowledgment that Devon wasn’t the right man for her, but that Nate is.

This sharply written romantic triangle, or rectangle, if Amanda will be included, has reached its climax. Fallout and great performances are sure to persist.

’90 Day Fiancé’ Spoilers: Brittany Dating Somebody Else? Did She Use Yazan For Fame and PR?