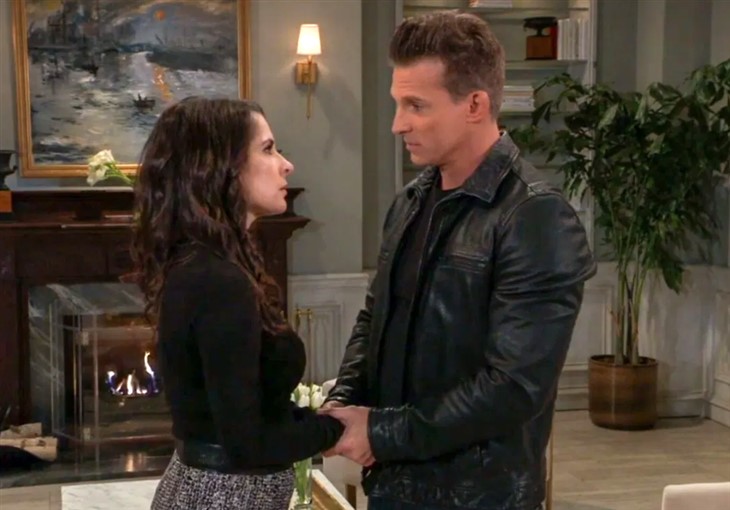 ABC General Hospital spoilers and promo tease that in Port Charles, New York Jason Morgan (Steve Burton) and Sam McCall (Kelly Monaco) talk about Halloween plans in the GH Sneak Peek for Monday. But Jason is distracted with everything going on and needing to be on the ready. Should Sam be worried?

Sam and Jason sit in Kelly’s, Jason with a cup of coffee. Sam has a glass of iced tea. Sam leans in as she tries to get his attention, taking his hands in hers, speaking his name. He asks her what she wants. Sam starts to talk about the kids and that Halloween is coming up this week. She suggests that maybe sometime during the upcoming week, they could let the kids dress up in their Halloween costumes. She adds to that decorating the apartment and carves some pumpkins, and figures he knows what she means.

He nods his head yes. He says yeah, that sounds good to him. Sam asks what day – he asks what day she is thinking. She tells him, Wednesday, she guesses. She thinks that would work best for the kids’ schedule. She asks if it’s good for him. Jason says yeah, yeah, he’ll definitely try. Sam scowls. She wants to know what he means by “he’ll try.” Jason takes a deep breath. He tells Sam that with everything that is going on, and the situation with Brando Corbin (Johnny Wactor) the situation is pretty fluid. Viewers will recall that Brando went undercover with Cyrus Renault (Jeff Kober) in a plan to take Cyrus down.

Sam and Jason continue to discuss “the situation”. Jason explains that things could change at any minute and that he has to be ready if they do. Sam asks how ready he has to be, and asks if she is supposed to take the kids and get out of town? He shakes his head no as she asks if he’s telling her that there’s a big mob war that’s about to start. He says no, no. Sam continues to prod, asking how fluid is “fluid” refers to the situation with Brando and Jason needing to be ready.

Jason tells her that if there is anything that she needs to know that he will tell her like he always does. Being with Jason and around the mob life and Sonny Corinthos (Maurice Benard) as long as she has, Sam never knows what to expect! Now that they have had a family for a couple of years, Danny Morgan (Porter Fasullo) with Jason and Scout Cain (Ella Ramicieri) with Drew Cain, (Billy Miller) Sam has become a little more family-minded.

Even though she understands Jason having to be on the ready just in case he’s needed, she hopes to be able to pin him down for Halloween at least! She looks like she is going to try to get more of a definite maybe but then Damian Spinelli (Bradford Anderson) walks in. He greets them and hopes that this arrival is not unwelcome. Sam looks at Jason and smiles.