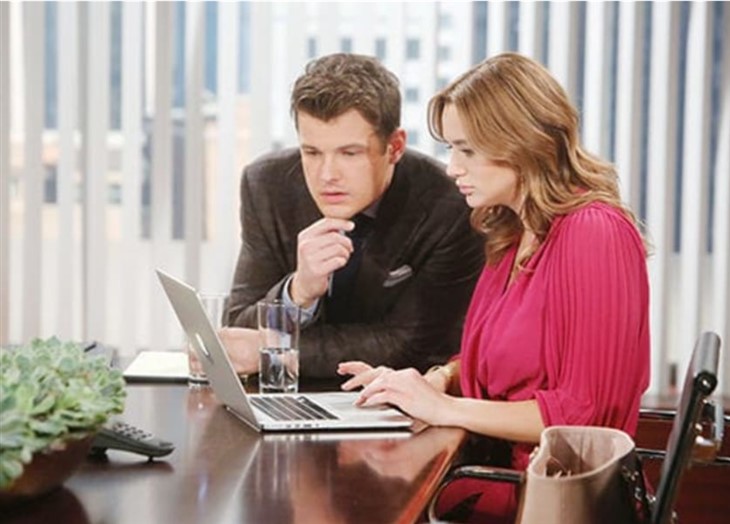 CBS The Young and the Restless spoilers document that in Genoa City Summer Newman (Hunter King) has serious doubts about Kyle Abbott’s (Michael Mealor) loyalty. That’s a major reveal, as Summer appeared to be fully confident that his past relationship never rivaled Skyle.

Summer did acknowledge that Kyle had his head turned by Lola Rosales (Sasha Calle). But King’s character repeatedly told Theo Vanderway (Tyler Johnson) that Kola wouldn’t last because she was Kyle’s, true love. That wasn’t a front, but actually represented Summer’s feelings at the time.

However, Kyle appears to not be fully over Lola, or at least that’s what Summer is trying to confirm. This implies that Lola may have been more than a rebound, and or represents an ongoing threat to Skyle sequel plans.

The Young And The Restless Spoilers – First Loves Matter Deeply

Before Lola there was Summer. That’s not a debatable plot point.

However, Summer created a negative impression of who she’d become within the last two years. No longer the shrinking violet that Mariah Copeland (Camryn Grimes) dubbed Snowflake, Summer returned to Genoa City, Wisconsin, with a brazen attitude a few years ago. That persona wasn’t who she’d become, but rather who she thought she should be as some type of self-defense measure.

Kyle initially wanted nothing to do with the new Summer. He fell for Lola and married her after briefly marrying Summer, as part of her half-liver donation to Lola.

Kyle is back where he was in the recent past. Summer’s unexpected bolt from their faux business trip hotel room revived deep misgivings.

Naturally being thrown by Summer’s choice to not only not get married out of town, as part of their planned elopement, but Kyle is also now a mess. His range of emotions includes anger, humiliation, and disillusionment.

Summer didn’t jet off to a faraway island but is in GC with the man she still hopes to commit to. The point of her clandestine adventure is to try and prove that Kyle is ready to commit to her, or might be open to a Kola reunion.

Kyle was the bad guy in the past. But Skyle reunion fans must focus on Summer now.

Summer is right to not get remarried to Kyle if she’s not ready. It’s also okay if she’s looking for reassurance from Kyle that she, not Lola, is and will be his sole romantic priority. But the manner in which she’s chosen to handle the pause between the recent engagement and whenever, or if, Skyle remarries isn’t good.