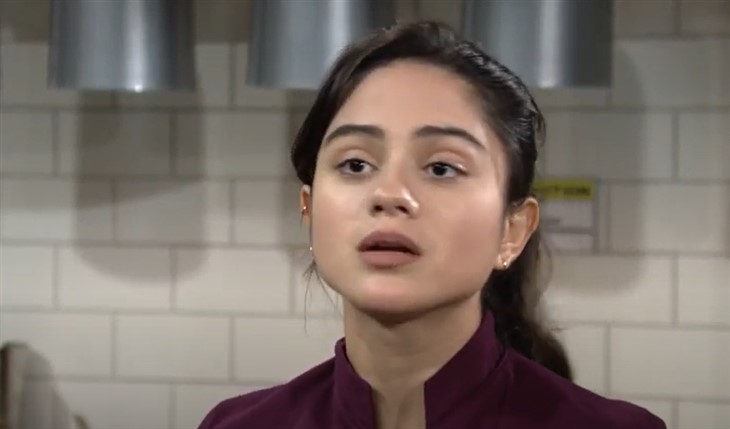 CBS The Young and the Restless spoilers tease that Lola Rosales (Sasha Calle) has not been a happy camper lately. Especially in the guy department. She’s in the process of divorcing and her rebound fling just isn’t that into her.

What’s a girl to do? In Lola’s case, the answer may be that tried and true soap cliché: a woman scorned on the warpath. Would Lola really become some type of obsessed stalker? Why not?

She really doesn’t seem to be able to be happy with a guy. Maybe it has to do with her unrealistic expectations and the fact that she has bad taste in men?

Lola really hasn’t changed much since she came to town. At that time she was obsessed with her career and she owned a broken-down food truck. Now she is a chef at a fancy hotel. Still, she seems to continue to put her career first.

Kyle Abbott (Michael Mealor) glommed on to Lola immediately and in the end, the mismatch was just that—no Bueno. They had a whirlwind romance, and got married and lived in a little alcove. Maybe this was the beginning of the end? Kyle is worldly and used to the finer things in life while Lola once got mad because he bought her a pricey purse!

The Young And The Restless Spoilers – Will Lola Turn Into A Vengeful Woman?

Once Kyle dumped Lola she gravitated to another mismatch, Theo Vanderway (Tyler Johnson). He also happens to be Kyle’s business rival and relative which isn’t too smart given the fact that Kyle keeps looking sideways at them.

All of this turmoil is constantly in Lola’s face and everyone has a breaking point. Lola has already had two meltdowns where Theo is concerned. First, she made him a big batch of pierogis thinking he would be back to enjoy them. Not so—Theo chose to do business instead of keeping his date with Lola.

Next, she was peeved to see him leave with Chelsea Lawson (Melissa Claire Egan). Once again it was a business deal but that didn’t stop Lola from worrying.

At the rate she’s going, there is only one direction she can go—to the point of no return!