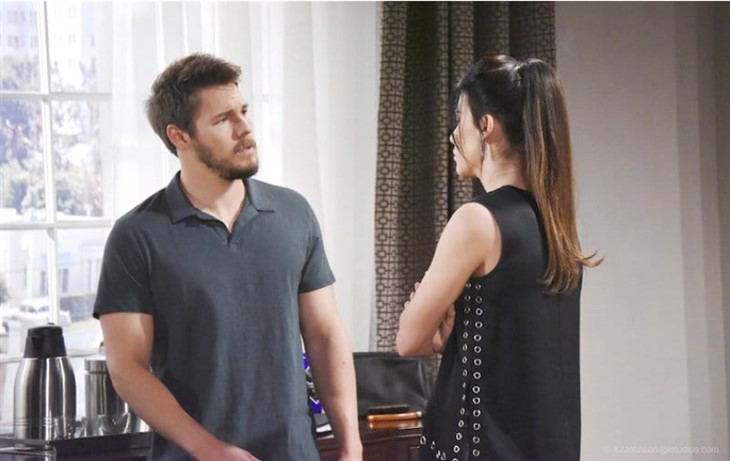 CBS The Bold and the Beautiful spoilers reveal that Steffy Forrester (Jacqueline MacInnes Wood) gets slapped! But Liam Spencer (Scott Clifton) isn’t abusing her. He’s doing whatever is necessary to revive her after finding the young woman unconscious and unresponsive. Then, he tears apart her entire house looking for pills. Find out what the actor had to say about the scene.

The Bold And The Beautiful Spoilers – Unconscious and Unresponsive

B&B spoilers reveal that Liam goes over to Steffy’s house to talk about her relationship with Dr. John “Finn” Finnegan (Tanner Novlan). When he gets to her house, Steffy doesn’t answer the door and she doesn’t pick up Liam’s phone calls. He knows she is there with Kelly Spencer (Colette and Avalon Gray), so he starts peering in the windows. He finally walks inside and finds Steffy unconscious and unresponsive.

Liam realizes that something isn’t right when he can’t get Steffy to wake up. He checks to make sure she has a pulse and then tries everything to revive her. This includes slapping Steffy across the face. Finally, Steffy starts to come out of her painkiller-induced blackout. Part of Liam is relieved that she is alive and the other part of him is livid. Actor Scott Clifton tells Soap Opera Digest,

“Liam goes into a full panic, the point where he’s slapping her face to get her to come out of it. Eventually, she does come to. She’s disoriented and reactive and defensive. She’s clearly loaded…”

The Bold and the Beautiful Spoilers  – Tearing Apart the House

After Steffy wakes up, she lashes out at him for being there. She also is annoyed that he keeps asking her about pills. He knows that she passed out because of the painkillers and he starts demanding to know where the prescription bottle is. Determined to find out where Steffy is hiding the pills, he tears apart the whole house looking for it.

“He’s lifting up couch cushions, opening drawers, and throwing toys all over the place — whatever he can do to find any potential hiding place.”

The Bold And The Beautiful Spoilers: Thorsten Kaye On Wedding Do-Over, ‘It Will Upset Brooke’ https://t.co/6mptrBG8SY pic.twitter.com/LERiPilXar

The Bold and the Beautiful spoilers reveal that eventually, Liam does find Steffy’s secret stash of pills. That’s not the upsetting part, though. They are in a place where Kelly could have easily got to them, making Liam fear that their daughter is not safe with Steffy right now.

“… they’re not only hidden, but in a place where Kelly could actually get her hands on them.”

Steffy and Liam fight over her lying about the pills and she kicks him out. Liam agrees to leave but says he’s taking Kelly with him.

Days Of Our Lives Spoilers: Emily O’Brien Talks Being Back And Better Than Ever Before