The Young And The Restless Spoilers: Lauren Turns The Tables On Jack Abbott 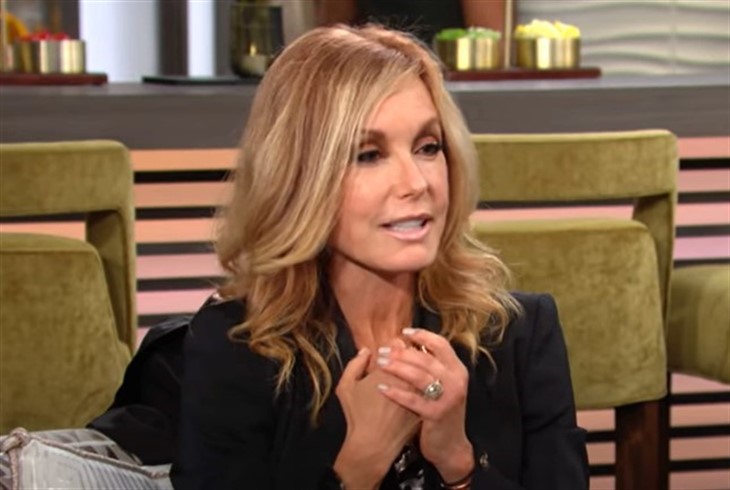 The Young And The Restless Spoiler Updates

One question longtime viewers of The Young and The Restless may have is exactly why would Lauren turn the tables on Jack? Another question is exactly what tables would she turn on him? There is a possibility that her new executive assistant’s collusion with Jack’s nephew might be what is really behind this turn of events – uh, tables!

Viewers will recall from a recent episode that Sally Spectra (Courtney Hope), even though she took the job Lauren had available, really came hoping to take over running Jabot Collective, only to find out it folded – or so she had assumed when Jack told her it had been divested. As she talked with Theo Vanderway (Tyler Johnson) in Society, he told her it had actually been sold to Fenmore’s – Lauren’s company that Sally is now working for!

They also discussed Theo’s relation to the Abbotts through Dina Mergeron (Marla Adams) and how Theo only got a pen in her will. He feels like he deserves more than that, and wants payback for all the years his father missed out on, having passed away and never knowing he was adopted. They make a deal to help each other achieve their goals! Theo plans to contest Dina’s will.

Lauren happens to have what is left of “The Teardrop of Love” necklace after Jack had portions of it made into jewelry, cufflinks, and a tie tack for everyone except Theo! Jack felt bad afterward, but he was simply overwrought over losing his mother and didn’t even think about including Theo, although he did show up at the will reading.

Kyle Abbott (Michael Mealor) was upset and didn’t feel Theo should be included but he actually had as much right to be as Ashley Abbott (Eileen Davidson) – after all, John Abbott (Jerry Douglas) wasn’t her birth father either, even though he raised her. This was Dina’s children and grandchildren who were gathered, not John’s. As Lauren’s executive assistant, Sally would have access to all of Lauren’s files and quite possibly be able to find where she’s storing the “Teardrop of Love”. In this way, she can give this information to Theo, who can then use it, in turn, to contest that he should have it as her legal grandson.

He may not be able to contest anything Abbott, but he can contest for that emerald which is likely to be worth a pretty penny; and this may be how Lauren, in turn, will have to turn the tables on Jack – by being forced to allow Theo to inherit the “Teardrop of Love”! After all, her father had bought it apparently from someone who stole it from Dina at some point so with a legal bill of sale it was legally his…he just didn’t know it was hot merchandise! Now the question becomes – is there really a curse on it? Will Theo inherit a whole lot of trouble for himself instead of an emerald he can sell?