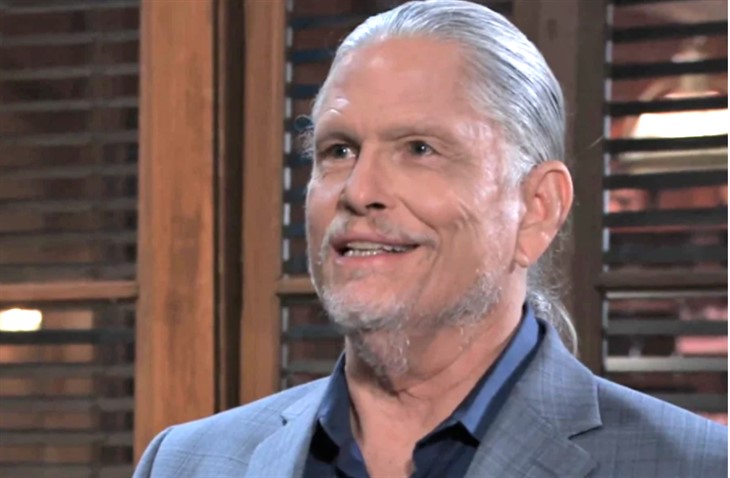 General Hospital spoilers tease that Cyrus Renault (Jeff Kober) demanded a decades-old case file from the PCPD in a recent episode of GH. Could it be the David Hamilton (Jerry Ayres) case back from when Mayor Laura Collins (Genie Francis) was just a teenager?

Longtime General Hospital viewers will recall that David Hamilton was a professor and a former college roommate of Rick Webber (then played by Michael Gregory) who had been paralyzed in an accident that killed his wife and children. Apparently, something had happened to their home structurally and it collapsed, but back then the doctors couldn’t find any physical cause for David’s paralysis. Rick, feeling compassion for his old roomie, invited him to live in the Webber home.

Rick and Lesley Webber (Denise Alexander) and Laura lived in the home, although Lesley sensed something off about Hamilton from the start and didn’t trust him. Laura, however, was rather enchanted with him even though she had begun dating Scotty Baldwin (Kin Shriner) at the time. Laura had rebelled against her mother, and even though she and Lesley had come to a tenuous truce, Hamilton’s presence didn’t help matters any since Laura was obviously cozying up to the older man.

As for him, he began painting portraits of Lesley and finally got his own apartment, which for the time being relieved Lesley, but soon his actions would again cause a rift between mother and daughter. He had a very nosy neighbor named Mrs. O’Brien (uncredited).

It wasn’t very long before Laura became smitten with Hamilton! She was still dating Scotty, and Hamilton was trying to seduce Lesley out of revenge for his late wife had been in love with Rick! Lesley rebuffed him and rejected him on the first pass he made at her, and he decided then to go after Laura, figuring she would do just as well for his revenge plot against Rick! He befriended her and soon seduced her into having an affair with him, which at her age constituted statutory rape! Later, Rick, along with Dr. Monica Bard, who later became Monica Quartermaine (now played by Leslie Charleson) found out that

Hamilton was buying up land in a scheme to defraud the hospital, although how exactly buying up land figured into a fraud scheme that would affect GH is lost to General Hospital history. When he was exposed, Laura wanted to go with him when he fled town. But he gave Laura a very rude awakening, and told her he was only “romancing” her to get revenge on her mother and Rick! She flew into a rage and pushed him, where he hit his head on a fireplace hearth and died. Lesley, wanting to protect Laura, took the blame, but by the time it came to court Laura had blocked out the traumatic memory.

She went to counseling with General Hospital’s psychiatrist at the time, Peter Taylor (Craig Huebing), and eventually remembered what had happened. She ran away to New York City! Scotty and his friend, Bryan Phillips (Todd Davis) tracked her down and brought her back home, and she confessed to killing Hamilton and the charges were dropped against Lesley. Being under the legal age, she got six months’ probation and the death was ruled an accident.

Why Would Cyrus Renault Want This File If The Case Was Closed?

The big question here is, why is Cyrus interested in this file if the case was closed and Laura got probation? The file he requested was forty years old give or take a year, and the David Hamilton murder took place in 1978 – forty-two years ago! The only other possible case it could refer to would be the death of Theresa Carter, (Alicia Arden) a nurse who Laura killed with a camera when she walked in on Rick cheating with her in an attic above Frisco and Felicia Jones’ (Jack Wagner, Kristina Wagner) garage where Laura, Rick, and Lesley had lived for a short time. Rick sedated her with a drug meant to cloud memories, which unfortunately surfaced in a post-traumatic way many years later.

At the time, Rick called Scotty, and they buried Theresa in the back yard! Theresa was also killed in 1978, the same year as David Hamilton! It may be the Theresa Carter case that Cyrus is really interested in because Laura was never prosecuted for the killing, Rick is dead, and Scott was an accomplice! Was it Scotty she was calling on the phone saying they were in trouble?

The Young And The Restless Spoilers: Lauren Turns The Tables On Jack Abbott

The Bold And The Beautiful Spoilers: Zoe Makes Her Choice – Team Carter Or Team Zende?