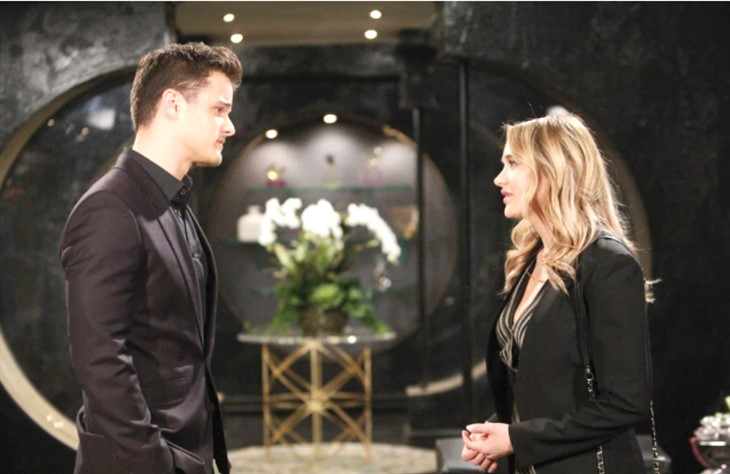 The Young and the Restless spoilers document that in Genoa City, Wisconsin if Kyle Abbott (Michael Mealor) might have already cut ties if were reconsidering Summer Newman (Hunter King) as a business partner. But she’s the true love of his life and with that plot point being reaffirmed Kyle is trying to overcome the latest difference with the woman he still wants to remarry.

Skyle fans took to heart this week, as Summer and Kyle continued to keep lines of communication open. Because there was no betrayal on either side it’s reasonable to believe that these two young adults, who behave like teenagers in a first-time relationship, are going to make it.

Young And The Restless Spoilers – Lola Rosales Issues A Command

It just so happened that Lola Rosales (Sasha Calle) was sitting in the lobby at the Grand Phoenix Hotel when Summer and Kyle were having a public disagreement. Lola called out to the woman she lost her husband to, basically telling Summer that she should get over herself.

Kola was cute while it lasted. But the seemingly happy couple proved to be one-sided, with Lola being all-in and Kyle still thinking about Summer. Skyle’s revival happened because Lola forced Kyle to admit what, or who was in his heart. He did and Summer was briefly overjoyed.

She’s a Newman, so it’s natural that Summer is an over-analyzer. Her family is always in the public fishbowl, which causes those in this clan to consider life before, during, and after it happens.

Summer has an eye for business, which makes her more like her mother and paternal grandfather, than her father. But similar to those family members, she tries to apply business methods to relationship issues, which never works.

Kyle represents Summer’s fully emotional side. She loves him like no other man, wants to have a legitimate marriage, as opposed to their faux union, and is interested in having children with him. Summer needs to see the goal, rather than the quarterly report minutia.

Kyle knows that he and Summer haven’t developed any real problems in recent weeks. In effect, she wasn’t comfortably eloping and bolted back to Genoa City, Wisconsin. That actually reflects her intention to get the start of their marriage right this time.

Both people look more remorseful than angry. So, Skyle fans should anticipate the temperature continuing to dissipate. Hopefully, this fated couple will fully reconcile soon, with Kyle reinforcing that he and Summer can trust each other.

’90 Day Fiancé’ Spoilers: Is Brittany Banks’ Dad Greg Trying To Get His Own TLC Spinoff?