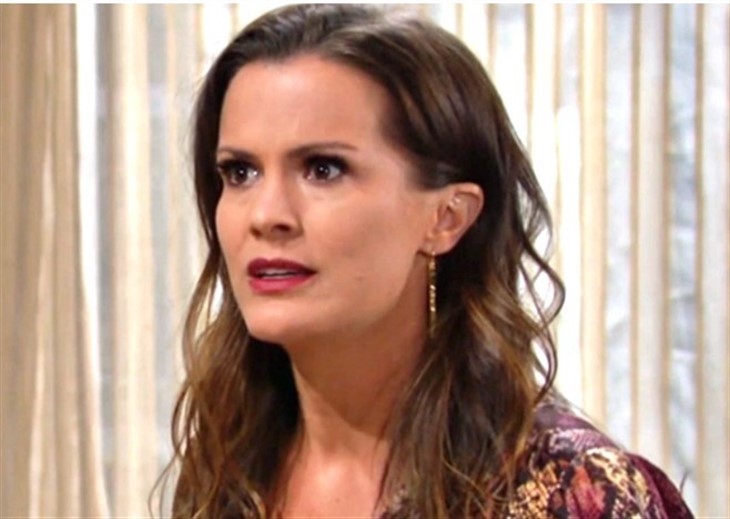 The Young and The Restless spoilers tease that in Genoa City, Wisconsin Chelsea Lawson (Melissa Claire Egan) will strike back at Sharon Newman (Sharon Case) for committing Adam Newman (Mark Grossman) to a mental health facility; both she and Adam will be livid!

Viewers of The Young and The Restless will recall that Victor Newman (Eric Braeden) showed up at Adam’s penthouse apartment after Sharon tried to call him while Chelsea was there. Chelsea saw Sharon’s name come up on Adam’s cell phone and assumed the worst, as he tried to convince her to bring Connor Newman (Judah Mackey) and leave Genoa City with him.

Chelsea had told Adam that she needed more time to think this over and left. Victor had just come from Crimson Lights, where he had enlisted Sharon’s help in getting Adam the kind of help that he needs. Then, presumably, when Adam rejected her call as Victor was standing there in front of her, Victor left to go talk to him in person. Victor told him that he needed help-professional help, and Adam told him it was a little too late for that.

After some somewhat unpleasant discussion between the two, Victor left. Adam will convince Chelsea to leave town with him and the plans are for her to get Connor from a private school and meet somewhere to leave together when Adam is served with judicial commitment papers that Victor had Sharon help him by signing them as a psychologist!

Y&R Spoilers – Chelsea Newman Finds Out Adam Newman Has Been Committed And Both Of Them Are Furious!

Chelsea will find out that Adam has been committed, and Sharon will be the first person she will blame! Both she and Adam will be furious; Adam will know his father is behind the scheme, but without Sharon’s help he never would be able to pull something like that on his own!

Adam will realize that too, although he will probably tell Chelsea about the conversation Victor had with him after she left his penthouse. Chelsea, however, will strike back at Sharon for putting Adam in the hospital. Even though Chelsea may agree that Adam needs help from remembering what he did as a child has done to him, she won’t like that he was forced like this through a court order.

More than likely her jealousy will flare as well, and she may even accuse Sharon of putting him in the mental hospital because she couldn’t have him! Adam will be furious at Sharon and Victor both, but likely will feel betrayed by Sharon! After all, this is the woman who he felt was the only woman who really got him, who understood him, who he always went to for help! It looks like it will be a drama-filled confrontation!