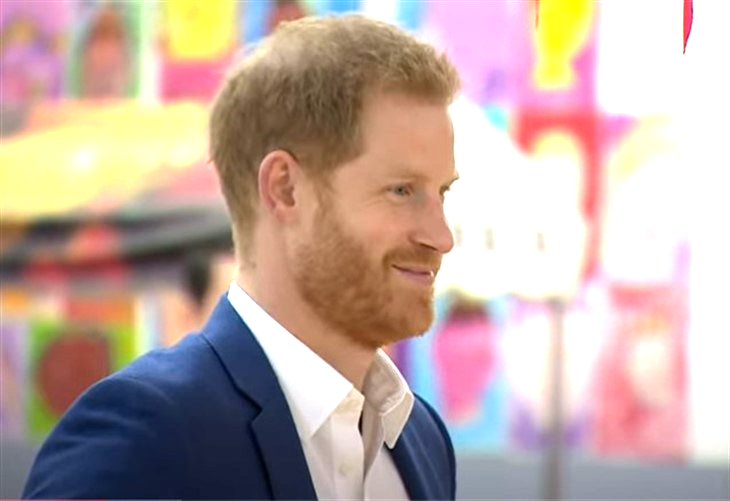 British royal family news reveals that Prince Harry’s crack PR team is doing its job earning the millions he pays them. Last night he crashed a virtual veteran’s fundraiser, Stand Up for Heroes, and popped off, “As far as I see it, service is what happens in the quiet and in the chaos. It’s what happens when people aren’t looking and it’s about how we take care of each other every single day.”

Those words were meant to diffuse the stink bomb he dropped for using Los Angeles National Cemetery in a failed photo op to garner sympathy for himself. Is it possible that someone of Harry’s intellect suddenly got enlightened or is it more likely that his highly paid PR posse told him to make amends and exactly how to do it?

Earlier in the day photos were released of Harry “helping” at a charity event for the needy in what smells like a concerted PR attempt to perfume away from the stench of the prince’s previous cemetery faux pas. Is anyone buying the prince’s sudden rehabilitation?

Or is he desperately throwing his Netflix millions in the wind in the hopes that his communications team can sanitize his image, scrub away his past conduct? This after all is the same guy who thought it hilarious to dress as a Nazi for Halloween and was ordered to attend sensitivity training after openly mocking an individual of a different culture from his privileged Anglo-Saxon one. Note to Harry’s PR team: start hoarding the Febreeze.

The Stand Up For Heroes comedy event was hosted by Jon Stewart, and presented by the Bob Woodruff Foundation and the New York Comedy Festival who obviously thought the Fresh Prince of Montecito belonged on a program honoring veterans.

What did Harry talk about during his undeserved air time? He talked about himself of course. “I created the Invictus Games – to give injured servicemen and women a platform to excel and reaffirm their values of resilience, of community and strength, which are inherent in each and every one of us.”

He also made an attempt to connect with the people who don’t live in million-dollar mansions, dump their families for lucrative Netflix deals, and ridicule real military heroes by using their graves for photo ops: “For the whole world, this year has been and continues to be incredibly hard. But we’ve also seen incredible resilience and purpose.”

On the last point, he is correct. Harry and his wife Meghan Markle have shown incredible resilience; they keep bouncing back after every cringe-worthy interview, podcast, and grave stomping.