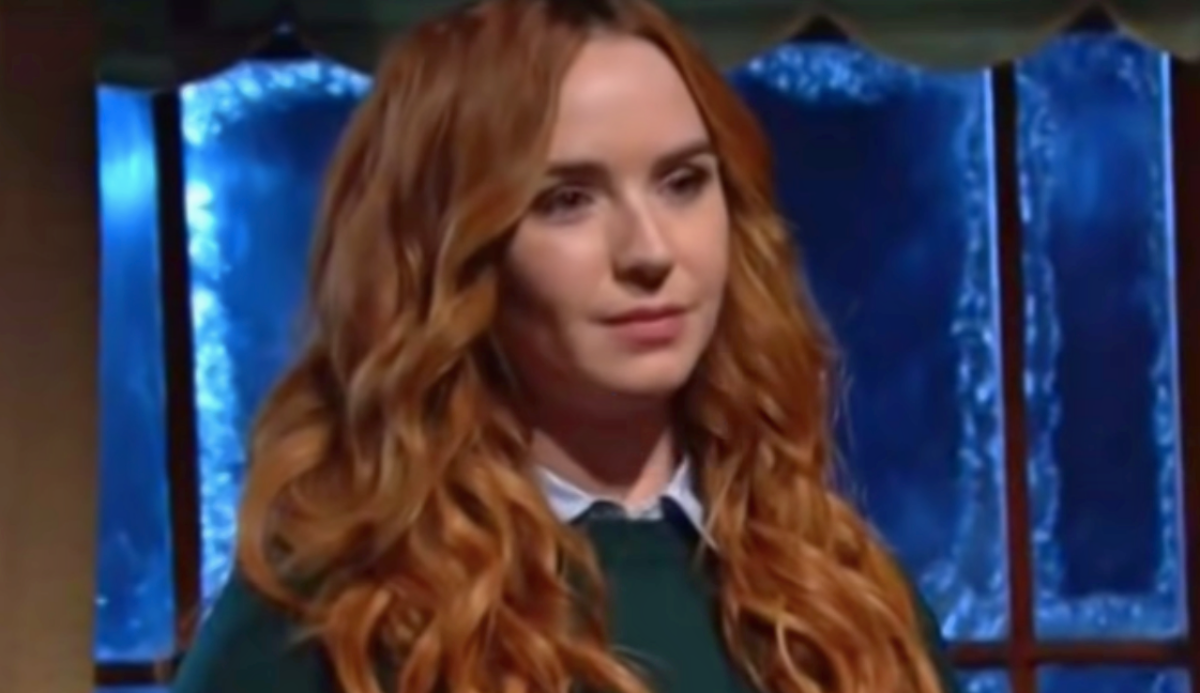 The Young and the Restless (Y&R) spoilers for Friday, February 7, tease that Sharon Newman (Sharon Case) will struggle as she gets ready to start chemotherapy. At home, Sharon mentions the meals she’s been prepping for after her treatment begins. She admits she’s been getting encouragement from her online cancer support group, but Rey Rosales (Jordi Vilasuso) is willing to listen, too.

Y&R Spoilers: Sharron Newman Will Struggle As She Gets Ready For Chemo

Sharon’s still having a hard time accepting this reality. It feels like the kind of thing that happens to someone else instead of her. Sharon doesn’t want to fall apart and tries to keep herself busy. As for Rey, he insists on sleeping on the sofa and gets Sharon tucked in bed.

Sharon has trouble sleeping and eventually spots who she believes is Mariah Copeland (Camryn Grimes) nearby. Cassie Newman (Camryn Grimes) reveals who she actually is, so Sharon’s comforted briefly. However, Cassie insists she needs Sharon to come with her. She beckons her mom by extending a hand, but Sharon wants Cassie to go and says she’s not ready for this.

After Cassie vanishes, Sharon’s dream continues down in the living room. She sees that Rey isn’t there and runs to the door, where the wind’s whirling around. Next, Sharon’s suddenly at Crimson Lights. She’s taken aback to learn Rey moved back to Miami. Phyllis Summers (Michelle Stafford) points out that Rey loved the old Sharon…not this.

Young And The Restless Spoilers: Tessa Porter Will Take Along Someone On Tour With Her

Sharon notes that she still has Mariah, but her daughter contends that she’s going on tour with Tessa Porter (Cait Fairbanks). Sharon pushed Mariah away anyway, so Mariah’s hitting the road. Nick Newman (Joshua Morrow) ultimately arrives in a tuxedo for his hot date with Phyllis. He thinks Phyllis looks incredible and barely notices Sharon.

Sharon cries out that she can’t go through this alone. Soon after, she’s back in bed and gets reassurance from Cassie. Downstairs, Mariah comes in and gets the scoop on why Rey’s staying. She’s hopeful about Sharon having sweet dreams up in her room.

Sharon faces more nightmares instead – including one where she sees herself on the operating table. The doctors are performing surgery in the living room while Mariah hosts a talk show. She declares that this is the day Sharon’s life changed forever.

Y&R Spoilers: Nick Newman, Phyllis Summers And Rey Rosales Will Talk About How Sharon Newman’s Treatment Has Changed Her

Nick, Phyllis and Rey are there to talk about how much Sharon changed because of her treatment. It was most difficult for the kids, who remember their mom how she used to be. Nick insists they don’t talk about Sharon much anymore. As Mariah’s interview ends, Sharon flatlines on the table. She’s standing beside herself as she begs for a chance to do things differently.

At the Grand Phoenix, Sharon dreams about radiation therapy and is given pills along with a cane. Phyllis points out that chemo made Sharon’s bones brittle, so it’s important that she doesn’t fall in her weakened state. Sharon looks in a mirror and sees that she’s wearing a scarf on her head.

Faith Newman (Alyvia Alyn Lind) appears and gets all weepy before Cassie’s there again. Cassie says it’s time go to home and tells Sharon not to be afraid. Sharon wakes up startled in bed before joining Rey and Mariah downstairs. She overhears them wishing Sharon would stop shutting them out.

The Young and the Restless Comings And Goings: Beth Maitland Reprises Her Role https://t.co/9oX9Xo4W6r pic.twitter.com/tZNdYup4Xv

Young And The Restless: Sharon Newman Joins Her Family And Tells Them About Her Dreams

Sharon joins them on the sofa and talks about Cassie appearing to her in a dream. After Sharon suggests Cassie wanted to take her home, she clarifies that home is this one – right here with her loved ones. Sharon intends to lean on them and tell them what she needs. She admits she’s hungry, so the table is set as Nick and Faith get in on the love fest. Sharon thinks she’s the luckiest woman in the world.

Back upstairs in bed, Sharon sleeps sandwiched Faith and Mariah. Cassie looks angelic as she watches them all sleeping nearby. The Young and the Restless spoilers say another action-packed episode’s ahead. We’ll give you updates as other Y&R news and rumors emerge. Stay tuned to see what else is brewing in Genoa City.